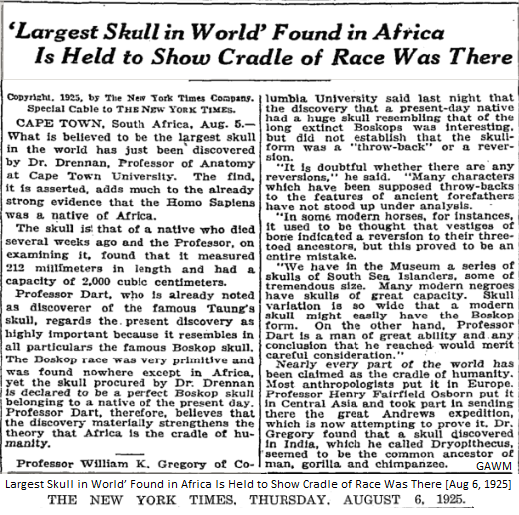 Found in Africa Is Held to Show Cradle of Race Was There.

CAPE TOWN, South Africa, Aug 5, – What is believed to be the largest skull in the world has just been discover by Dr. Drennan, Professor of anatomy at Cape Town University. The find, it is asserted, adds much to the already strong evidence that the Homo Sapiens was a native to Africa,.

The skull is that of a native who died several weeks ago and the Professor, on examining it, found that it measured 212 millimeters in length and had a capacity of 2,000 cubic centimeters.

Professor Dart, who is already noted as discoverer of the famous Taung’s skull, regards the present discovery as highly important because it resembles in all particulars to the Boskop skull.

The Boskop race was very primitive and was found no where except in Africa, yet the skull procured by Dr. Drennan is declared to be a perfect Boskop skull belonging to a native of the present day. Professor Dart, therefore, believes that the discovery materially strengthens the theory that Africa is the cradle of humanity.

Professor William K. Gregory of Columbia University said last night that the discovery that a present-day native had a huge skull resembling that of the long extinct Boskops was interesting but did not establish that the skull form was a “throw-back” or a reversion.

“It is doubtful there are any reversions,” he said. Many characters which have been supposed throw-backs to the features of ancient forefathers have not stood up under analysis.

“In some modern horses, for instances, it used to be thought that vestiges of bone indicated indicated a reversion to their three-toed ancestors, but this proved to be an entire mistake.

“We have in the Museum a series of skulls of South Sea Islanders, some of tremendous size. Many modern negroes have skulls of great capacity. Skull variation is so wide that a modern skull might easily have the Boskop form. On the other hand, Professor Dart is a man of great ability and any conclusion that he reached would merit careful consideration.”

Nearly every part of the world has been claimed as the cradle of humanity. Most anthropologists put it in Europe. Professor Henry Fairfield Osborn put it in Asia and took part in sending there the great Andrews expedition, which is now attempting to prove it. Dr. Gregory found that a skull discovered in India, which he called Dryopithecus, seemed to be the common ancestor of man, gorilla and chimpanzee.