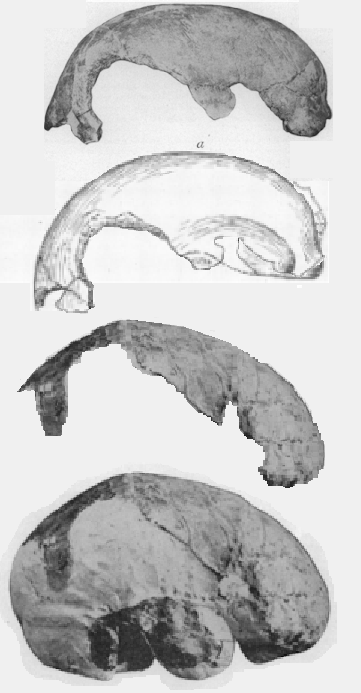 In 1913, two farmers dug up skull fragments near Boskop, a town in South Africa. They brought the find to Frederick W. Fitz­Simons, director of the Port Elizabeth Museum, in a small town at the tip of South Africa. He reported his findings at a 1915 meeting of the Royal Society of South Africa. “The cranial capacity must have been very large,” he said, and “calculation by the method of Broca gives a minimum figure of 1,832 cc [cubic centimeters].” The Boskop skull, it would seem, housed a brain perhaps 25 percent or more larger than our own.

The Scottish scientist Robert Broom reported that “we get for the corrected cranial capacity of the Boskop skull the very remarkable figure of 1,980 cc.” (Still too low)

(Our cranial size averages 1350 cc.) Not only was the skull bigger, the extra capacity was in the region of the pre-frontal cortex, linked to our higher cognitive functions.

Two neuroscientists, Lynch and Granger (2008 ), extrapolated the IQ from the brain size. This early human had a possible IQ of 150. (too low)

But wait a minute:

Anthropologists and archeologists claim this skull is simply a variation of a normal human—one with a larger skull, but not a “significantly” larger skull. This view is championed by John Hawks who states he has not read Lynch and Granger’s book but was not “surprised to see what appears to be complete lunacy in the book description.” He then cites a review of the literature done 50 years ago before claiming the idea came to Lynch and Granger from a science fiction published in 1958. Personally THAT seems far-fetched!

At the time of writing the tallest, scientifically recorded, man was Robert Pershing Wadlow who was 9ft 11in. His skull was 36% larger than that of his father.

As if the Boskop story were not already strange enough, the accumulation of additional remains revealed another bizarre feature: These people had small, childlike faces. Physical anthropologists use the term pedomorphosis to describe the retention of juvenile features into adulthood.

Here is what I suspect: Any evolutionary reconstruction is a Jackalope, a Frankenstein of parts.

All creatures follow a consistent fractal pattern. These patterns allow us to know the fakes and faux pas. Evolutionists when they find an oversized tooth or skull they reconstruct a small body. Each of their imaginative constructions end up with a macrocephallic individual. Here are some examples:

Head to body ratios decrease with maturity, it’s called neotony. Babies start with a 1-3 ratio and as an adult have a 1-8 ratio. Only in evolutionary imaginations does neotony work in reverse.

It seems that there is a pressure to work backwards by any and all means from modern to a single organizism coming from a soup. So giant fossils are a testament against evolutionism and their religious agenda.

A fragment of the zygomatic arch has been pushed as far as can be possible without using a grinder to make more room. (don’t laugh, I have videos of evo’s doing just that). Luckily the artist does show the overlap line and also. The vertical placement is corrected, and in fact may be more than what’s shown assuming that the zygomatic arch is the same size as modern humans. (although doubtful and was likely larger).

Assuming that the zygomatic arch was the same size and not larger you can see that the image is more naturalized. The image no longer looks as forced but more as it should be.

In this image the zygomatic arch is moved backwards to its correct position. The skull looks proportional less squashed which would increase the cubit capacity which is of course exactly what evolutionists would want to avoid.  Minimizing the cubit capacity with overlaps and misplacements is the rule not the exception.

In this image below you can see a detailed image of the Boskop skull and a representation of the skull casing. Something is different, the zygomatic arch is moved down and back of the cranial cast. 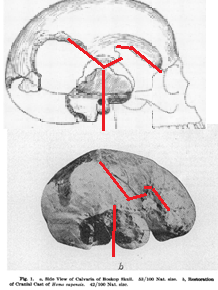 You can bare witness to this misinterpretation in the original drawing, to the broken zygomatic arch being raised high and too far forward. It would seem that the sculpture artist got the distance between the zygomatic and the and the bottom of the Cranial cap correct. However to keep the brain-casing small the width of the skull cap was reduced as you can see the result in the increased amount of plaster and the reduction in surface area of the skull cap.

So, there are three attempts at deception: 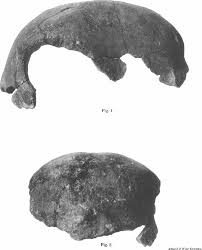 Here is a detailed photograph of the Boskop Skull. In this image you can see the side view of the skull. One thing for sure is that no one is going to dismiss this one as elongated due to banding or boarding. The skull is large in all directions. Not only is this skull the longest skull but it’s also the widest.

While attending a Proof of God conference in Orlando a man told me a story that when he was about 12 him and the other kids would find human skulls that were so large they could wear them as a hat.

Many of these same accounts are found throughout journalist, historical accounts and peer review journals of the 19th century. 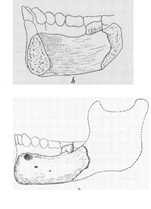 In this image you can see that the tooth is only part of the root.  Child size teeth are drawn in above the jaw fragment. These low profile teeth, are yet another tool to reduce the size of the skull.

As if the Boskop story were not already strange enough, the accumulation of other remains revealed another bizarre feature: Evolutionists promote that these people had small, childlike faces.  Physical anthropologists use the term pedomorphosis to describe the retention of juvenile features into adulthood. This phenomenon is sometimes used to explain rapid evolutionary changes when in fact they are rapid devolutionary changes.

Keep paedomorphosis in mind, it’s a rare condition, now couple that with another rare condition and you have hit an unlikely explanation. A syndrome lottery because not only do they ascribe Boskop of being hydrocephalus but also paedomorphic by bones from other individuals. It is unlikely either of the diagnosis’s are anything but shots in the dark. Neither of these are applicable, The Boskop skull is a normally shaped skull that is discredited and obscure because it is the most well documented giant skull. The only problem with the Boskop skull is that large skulls are not what evolutionists want to find. In fact 98% of the fossil record is not what evolutionists want to find and therefore mislabeled extinct.

Here we see the image of a Neanderthal Skull and a modern human skull on the left and the Boskop Skull with a skull of a modern human skull on the right. To keep consistency the face was enlarged by only 7%. The face was used from the Neanderthal skull. Human faces tend to grow until you die so with excessive age and maturity the face would be longer if the skull was longer. This same phenomenon is seen in elongated skulls, the faces tend to have larger eyes and longer faces. Evolutionists break from natural growth patterns because ultimately they are looking for small-monkey-men and they just don’t exist. The white lines show the skull length comparing the Neanderthal to the Boskop skull which is more than 7%. 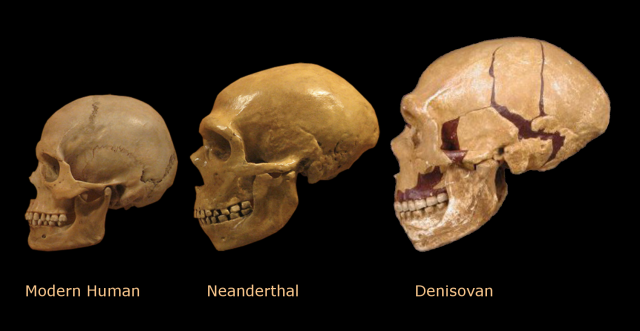 This is a reconstruction of what the Denisovans would look like, this image could very well say Boskop instead of Denisovan.

Currently Boskop is the largest skull academia accepts (with hesitation) followed by Amud1, and La Ferrassie.