The first Boskop skull was discovered in 1913 by Frederick FitzSimons, more skulls were later found by other paleontologists. Scientists say the Boskops were similar to us but had small, childlike faces and huge melon heads.The science writer Loren Eiseley described them in his book “The Immense Journey”:The man of the future, with the big brain, the small teeth…. He lived in Africa.
His brain was bigger than your brain.
His face was straight and small, almost a child’s face. When the skull is studied in projection and ratios computed, we find that these fossil South African folk, generally called “Boskop” or “Boskopoids” after the site of first discovery, have the amazing cranium-to-face ratio of almost five to one. In Europeans it is about three to one. This figure is a marked indication of the degree to which face size had been “modernized” and subordinated to brain growth.”Their cranial capacity was 1800 cc.,
(Low Estimate 1260 is average)~Chris L Lesley
compare that to modern humans who only average 1400 cc. (Too High an Estimate) ~Chris L LesleyThe authors of the book “Big Brain: The Origins and Future of Human Intelligence” Gary Lynch and Richard Granger speculate:“Just as we’re smarter than apes, they were probably smarter than us.”
Robert Broom gives the cranial capacity of the first Boskop skull discovered as 1980 cc:(again low estimate) ~Chris L Lesley”The cranial cast as thus restored displaces about 1960 cc. of water. If we add 20 cc. as a corection for the slight crushing of the left side we get for the corrected cranial capacity of the Boskop skull the very remarkable figure of 1980 cc.”
(“The evidence afforded by the Boskop skull of a new species of primitive man (Homo capensis)”, published in 1918 by Robert Broom) 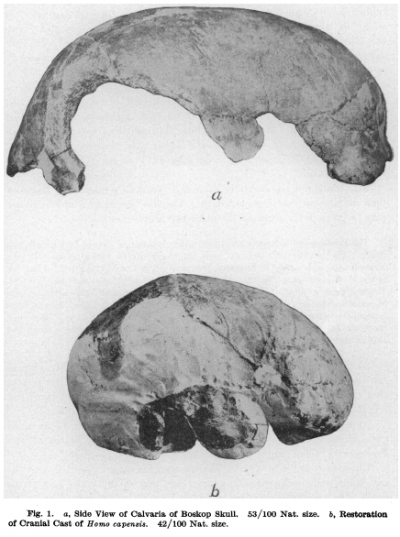 Figure A: Side view of first Boskop skull discovered in 1913. Figure B: Restoration of Cranial Cast. 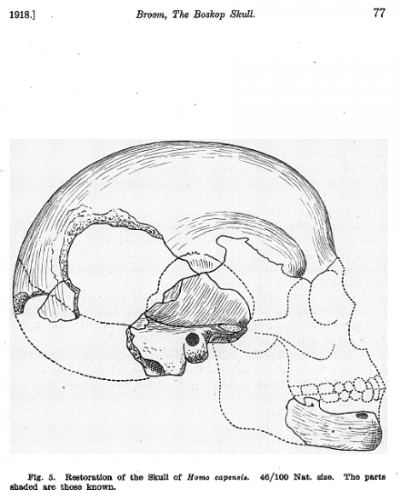 Big Brain: The Origins of Past Human Intelligence

Our big brains, our language ability, and our intelligence make us uniquely human. . . . .  human-like creatures called “Boskops” flourished in South Africa. They possessed extraordinary features: forebrains roughly
50% larger than ours,and estimated IQs to match-
far surpassing our own.
Many of these huge fossil skulls have been discovered over the last century, but most of us have never heard of this scientific marvel.Prominent neuroscientists Gary Lynch and Richard Granger compare the contents of the Boskop brain and our own brains today, and arrive at startling conclusions about our intelligence and creativity. Connecting cutting-edge theories of genetics, . . . . language, memory, learning, and intelligence, Lynch and Granger show the implications of large brains for a broad array of fields, from the current state of the art in Alzheimer’s and other brain disorders, to new advances in brain-based robots that see and converse with us, and the means by which neural prosthetics- replacement parts for the brain-are being designed and tested. The authors demystify the complexities of our brains in this fascinating and accessible book, and give us tantalizing insights into our humanity-its past, and its future.
http://www.squidoo.com/boskopman