a Cemetery of over a thousand giants 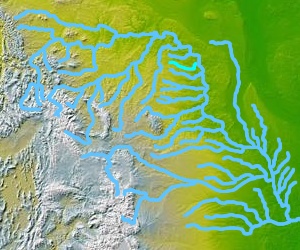 a Cemetery of over a thousand giants

1883  “Two miles from Mandan, on the bluffs near the junction of the Hart and Missouri Rivers, says the local newspaper, the Pioneer, is an old Cemetery of fully 100 acres in extent filled with bones of a giant race. This vast city of the dead lies just east of the Fort Lincoln road. The ground has the

appearance of having been filled with trenches piled full of dead bodies, both man and beast, and covered with several feet of earth. In many places mounds from 8 to 10 feet high, and some of them 100 feet or more in length, have been thrown up and are filled with bones, broken pottery, vases of various bright colored flint, and agates … showing the work of a people skilled in the arts and possessed of a high state of civilization. This has evidently been a grand battlefield, where thousands of men … have fallen. …Five miles above Mandan, on the opposite side of the Missouri, is another vast cemetery, as yet unexplored. We asked an aged Indian what his people knew of these ancient grave yards. He answered: “We know nothing about them. They were here before the red man.”  The Scientific American