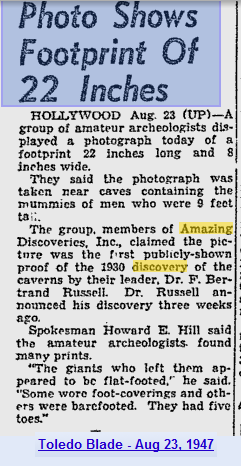 A group of amateur archeologists displayed a photograph today of a footprint 22 inches long and 8 inches wide. footprint.

They said the photograph was taken near caves containing the mummies of men who were 9 feet tall. The group members of Amazing Discoveries, Inc., claimed the picture was the first publicly-shown proof of the 1930 discovery of the caverns by their leader. Dr, F. Bertrand Russell Dr. Russell announced his discovery three weeks ago. footprint.

Spokesman Howard E. Hill said the amateur archeologists found many prints. The giants who left them appeared to be flat-footed,” he said. “Some wore foot coverings and others were barefooted. The had five toes.

So lets first look at what evidence is mentioned:

An Analysis of the evidence:

These individuals unlike one of the tallest man in modern times Robert Wadlow, these 9 footers were healthy. Robert Wadlow was unhealthy, he died at a young age. Robert Wadlow had an unhealthy pituitary malfunction. Robert Wadlow is a “FALSE-POSITIVE” for modern height. Meaning, that he does not represent normal or natural healthy height.

The people of the past, like these 9 foot mummies did not have a pituitary malfunction. Pituitary malfunctions are rare and multiple individuals having giantism is just not possible. We can rule out “mass-giantism” or “multiple-pituitary-malfunctions”, anyone that knows about this disease, knows that it affects individuals in very rare circumstances. Giantism is caused by a tumor, which causes, surprisingly , . . . weakness. Again, groups of people don’t get pituitary tumors.