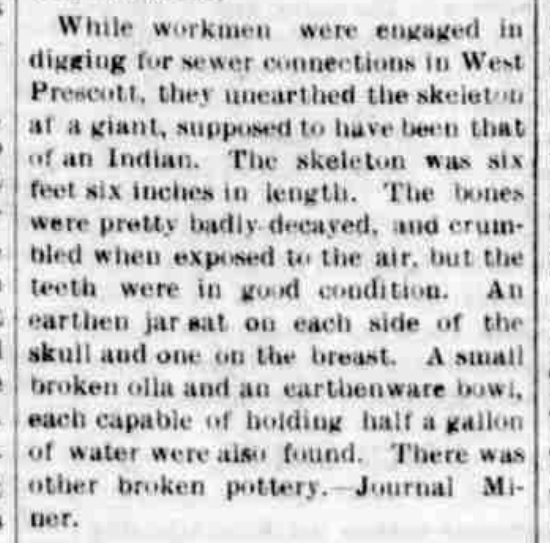 While workmen were engaged In digging for sewer connections In West Present!, they unearthed tho skeleton at a giant, supposed to have been that
or an Indian. The skeleton was six feet six inches in length. The txincs were pretty badly. decayed, and crumbled when exposed to the air, but the teeth were in good eouiiUiou. An earthen Jar sat on each side of the skull and one on the breast. A small broken olla and an earthenware bowl, each capable of holding half a gallon of water were also found. There was other broken pottery. Journal Minor. Antiquarian researches have shown that at one time, of which we have no historic account, the valleys and mesa lands of southern New Mexico and Arizona teemed with a busy population which followed the peaceful pursuits of husbandry. Ruined cities proclaim that fact and other relies of their handiwork. They possessed a high degree of civilization and were undoubtedly destroyed b a race of savages whose descendants have betm the bloody foes of a utilization in the southwest. Their lixed habitations
show that they Uvea by tilling the soil and that they practised the method now in vogue, is shown by extensive Irrigation canals, reservoirs and storage dams In the mountains ManyfTthem are as extensive and perfect .spcclmiues of engineering skill as those now being constructed by the aid of capital ami which will again make Arizona capable of sustaining a dense population In the works now being undertaken capital is but walking in the footsteps of a
prior civilization. It is making no new experiments and running no risks.