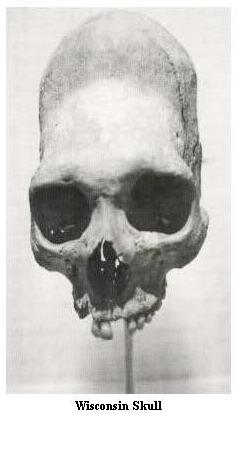 WISCONSIN MOUND SKULLS: Top photo is of anomalous skulls found by Mr. Connolly in a South American Museum. The general opinion seems to be that they are not the result of medical deformation and are too anomalous to be the result of “binding” techniques. In addition, some of the skulls have brain vault capacities significantly in excess of modern man.

http://www.riseearth.com/2011/11/alien-skull-pyramids-of-rock-lake.html
There are certain “earmarks” of longevity that one can bear witness to with these ancient predecessors. The Wisconsin Mound Skulls are not the same as today’s skull beyond the obvious elongation. First the eyebrows are more prominent which would suggest a higher level of maturity.  The nose would have been much more pronounced according to the size of the nasal cavity. The ears would have been longer as well. These are what are called the earmarks of longevity and a an indicator of greater maturity.
Madison Wisconsin is in Dane County.
Chris L Lesley GAWM