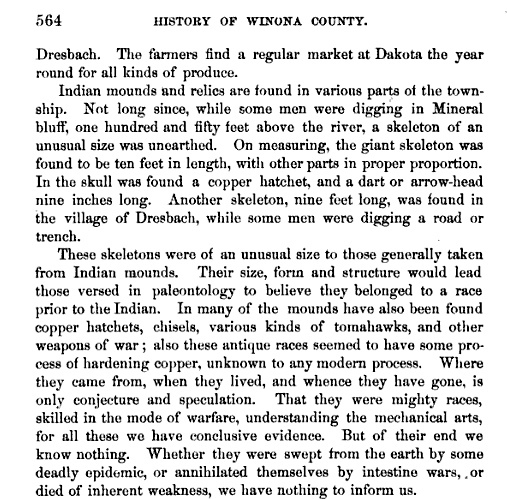 The archive documenting the Winona skeletons 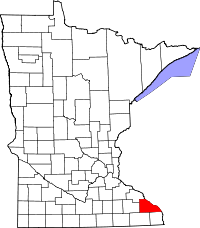 Indian mounds and relics are found in various parts of the township. Not long since while some men were digging in Mineral Bluff, one hundred and fifty feet above the river, a skeleton of an unusual size was unearthed. On measuring, the giant skeleton was found to be 10 feet in length, with other parts in proportion. In the skull was found a copper hatchet, and a dart or arrow-head nine inches long. Another skeleton nine feet long, was found in the village of Dresbach, while some men were digging a road or trench.
These skeletons were of unusual size to those generally taken from Indian mounds. Their size, form and structure would lead those versed in paleontology to believe they belonged to a race prior to the Indian. In many of the mounds were also found copper hatchets, chisels, various kinds of tomahawks, and other weapons of war;  also these antique races seem to have some process of hardening copper, unknown to any modern process. Where they came from, where they lived,  and whence they have gone, is only conjecture and speculation. That they were mighty races, skilled in the mode of warfare, understanding the mechanical arts, for all those we have conclsive evidence. But of their end we know nothing. Whether they were swept from the Earth by some deadly epidemic, or annihalated themselves by intestine wars, or died of inherent weakness, we have nothing to inform us.