THE BONES OF A GIANT RESURRECTED –

WILLIAMSON AHEAD AS USUAL. – 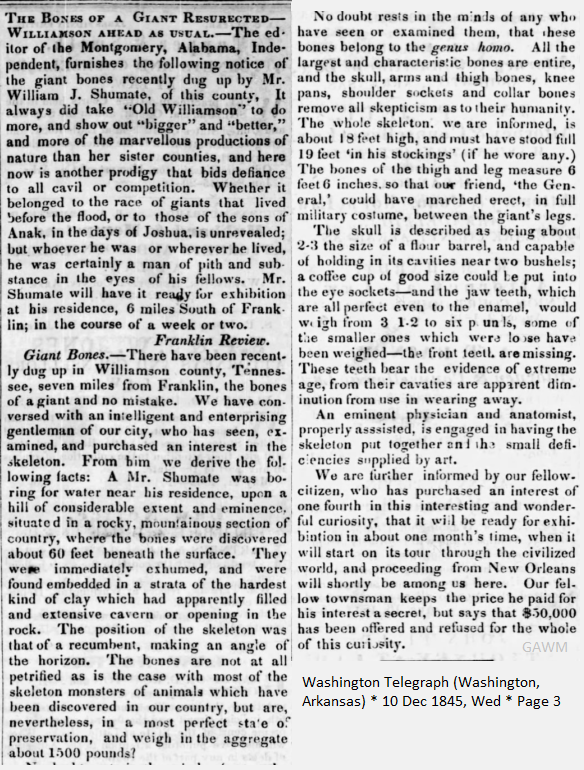 The editor of the Montgomery, Alabama, Independent, furnishes the following notice of the giant bones recently dug up by Mr. William J. Shumate, of this county, It always did take “Old Williamson” to do more, and show out “bigger” and “better” and more of the marvellous productions of nature than her sister counties, and here now is another prodigy that bids defiance to all cavil or competition. Whether it belonged to a race of giants that lived before the flood, or to those of the sons of Anak, in the days of Joshua is unrevealed; but whoever he was or wherever he lived, he was certainly a man of pith and substance in the eyes of his fellows. Mr. Shumate will have it ready for exhibition at his residence, 6 miles South of Franklin; in the course of a week or two. ~Franklin Review

Giant Bones.- There have been recently dug up in Williamson County, Tennessee, seven miles from Franklin, the bones of a giant and no mistake. We have conversed with an intelligent and enterprising gentleman of our city, who has seen, examined, and purchased an interest in the skeleton. From him we derive the following facts: A Mr. Shumate was boring for water near his residence, upon a hill of considerable extent and eminence, situated in a rocky, mountainous section of the country, where the bones were uncovered about 60 feet from the surface. They were immediately exhumed and were found embedded in a strata of the hardest kind of clay which had apparently filled an extensive cavern or opening in the rock. The position of the skeleton was that of a recumbent, making an angle of the horizon. The bones are not at all petrified as is the case of most of the skeletal monsters of animals which have been discovered in our country, but are, nonetheless, in a perfect state of preservation, and weigh in the aggregate about 1500 pounds?

No doubt rests in the minds of any who have seen of examined them, that these bones belong to the genus homo. All the largest and characteristic bones are entire, and the skull, arms and thigh bones, knee pans, shoulder sockets and collar bones remove all skepticism as to their humanity. The whole skeleton, we are informed, is about 18 feet high and must have stood full 19 feet ‘in his stockings’ (if he wore any.) The bones of the thigh and leg measure 6 feet 6 inches, so that our friend, ‘the General,’ could have marched erect in full military costume, between the giant’s legs.

The skull is described as being about 2-3 the size of a flour barrel, and capable of holding in its cavities near two bushels; a coffee cup of good size could i put in its eye sockets – and the jaw teeth, which are all even perfect to the enamel, would weigh from 3 1/2 to six pounds, some of the smaller ones which were loose have been weighed – the front teeth are missing. these teeth bear the evidence of extreme age, from their cavities are apparent diminuation from use in wearing away.

An eminent physician and anatomist, properly assisted, is engaged in having the skeleton, put together, and the small deficencies supplied by art.

We are further informed by our fellow citizen, who has purchased an interest of one fourth in this interesting and wonderful curiosity, that it will be ready for exhibition in about one month’s time, when it will start on its tour, through the civilized world, and proceeding from New Orleans will shortly be among us here. Our fellow township keeps the price he paid for his interest a secret, but says that $50,000 has been offered and refused for the whole of this curiosity.