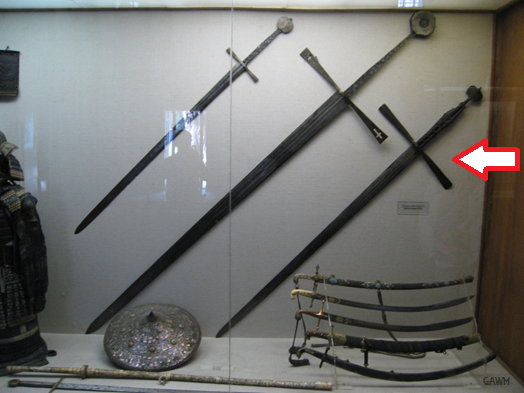 In 1791, Jacobus Kok wrote that above the porticus of the New City Hall of Leeuwarden, two remarkably  LARGE SWORDS. These large swords were found which were said to have belonged to Grutte Pier and Wijerd Jelckama. Imperial Armoury Topkapi Istanbul .

Wijerd Jelckama’s sword is much smaller than Pier’s but still giant size compared to the small one handed swords to the right and the regular size swords of a similar type which is shown on the upper left.

(c. 1490–1523) was a Frisian military commander, warlord and member of the Arumer Zwarte Hoop (“Arumer Black Hope”). He was the lieutenant of Pier Gerlofs Donia (also known as Grutte Pier) and fought along his side against the Saxon and Hollandic invaders. Jelckama took Donia’s place as freedom fighter after Donia died in 1520.

Together with Pier Gerlofs Donia, Jelckama fought against the Saxon warriors that occupied their homeland of Frisia, at the capture of Medemblik, and in the siege of Middelburg castle.