Who could have weilded a 64lb Hammer? 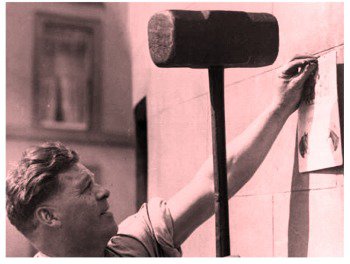 There is an ancient copper mine near the coastal town of Llandudno in North Wales. This area rises 220 meters above the Irish Sea, and it is known as the location of the Great Orme Copper Mine. It dates to the Bronze Age, about 3500 years ago. More than 2500 hammers at the mine have been recovered.

It is believed that the mine stretches for many kilometers, with six kilometers already surveyed. It is known to have nine levels within it, and over 1700 tons of copper are known to have been removed from the mine. This is quite a staggering accomplishment for a society of that era without the use power tools, or at least as we know power tools today.

A grown man (without back trouble yet) can wield a 20 pound hammer, but only for limited amounts of time. That is, unless smashing masonry and demolition is his livelihood.

In that case, he might do it for several hours at a time. This author owns a 10 pound sledge, and the only words to describe using it are misery, sweat and pain. And not necessarily in that order! It’s very hard to imagine using one of these for mining, day in and day out.

Head on hammer is about the size of a standard house brick.

So who or what could have wielded one of these back-breakers? If we scale up the size of the ancient people so they could use this tool, the giants at the copper mine may have been perhaps 12 to 18 feet tall, or about 3 times taller than an average human being of today.

To put this in perspective, the height of the wall in an average home in the United States built within the last 50 years in any given room is just 8 feet.

Perhaps these are the people referred to in the Bible in Genesis, where it says there were giants in [on?] the Earth in those days.

The 64lb hammer with a more than 9 foot handle will be on display at the museum. Greater Ancestors World Museum