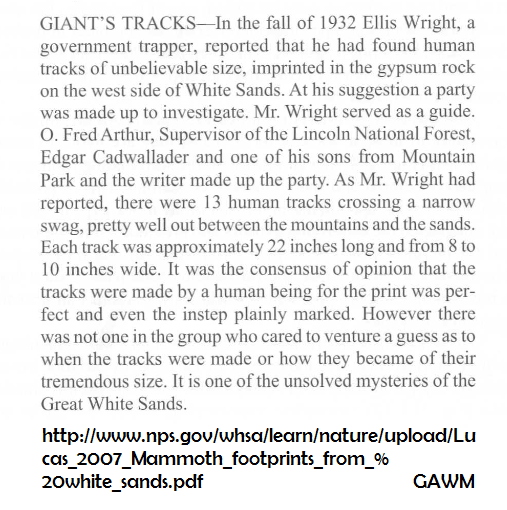 GIANT’S TRACKS-In the fall of 1932 Ellis Wright, a government trapper, reported that he had found human tracks of unbelievable size, imprinted in the gypsum rock on the west side of White Sands. At his suggestion a party was made up to investigate. Mr. Wright served as a guide, O. Fred Author, Supervisor of the Lincoln National Forest, Edgar Cadwallader and one of his sons from Mountain Park and the writer made up the party. As Mr. Wright had reported, there were 13 tracks crossing a narrow swag, pretty well out between the mountains and the sands. Each tracks was approximately 22 inches long and from 8 to 10 inches wide. It was the consensus of opinion that the tracks were made by a human being for the print was perfect and even the instep plainly marked. However there was not one in the group who cared to venture a guess as to when the tracks were made or how they became of their tremendous size. It is one of those unsolved mysteries of the Great White Sands.

Perfectly imprinted human footprints 22 inches long and 8 to 10 inches wide, in gypsum rock (twice the size of present day prints); the person was wearing a type of moccasin or sandal and appeared to be using a cane – 1932 (U.S. Department of the Interior Booklet, The Story of the Great White Sands)