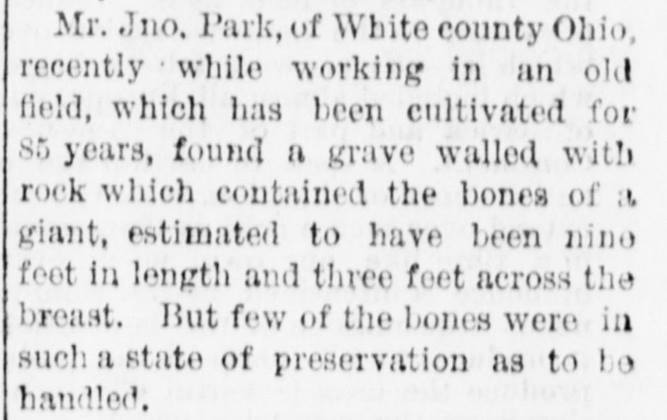 “Mr. Jno, Park, of White county Ohio, recently while working in an old field, which has been cultivated for 85 years, found a grave walled with rock which contained the bones of a giant, estimated to have been nine feet in length and three feet across the breast. But few of the bones were in such a state of preservation to be handled.”

Nine footers are golden, academia claims Robert Wadlow is the tallest man in history, far from it. In order to make extreme claims you need an extreme example. Si in fact i have created two videos making an extreme case towards 9 footers. The first one is entitled” “100 ancients bigger than Robert Wadlow”,

and the second is ” another 100 ancients  bigger than Robert Wadlow.

Check out the other videos, and be sure to subscribe to the channel.

Comment: In fact in these two videos demonstrate 1000 examples of 9 footers. There are two more videos on the subject in the future, and be sure to link them to other Wadlow videos making false claims about Wadlow being the tallest person ever.