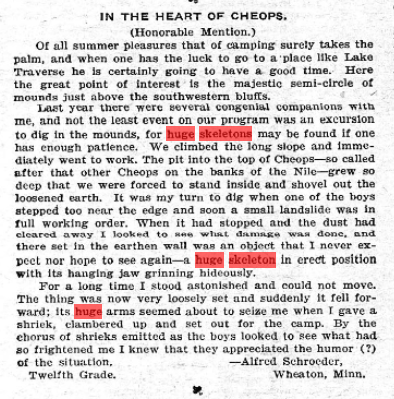 IN THE HEART OF CHEOPS. (Honorable  Mention.) Of all summer pleasures that of camping surely takes the palm, and when one has the luck to go to a place like Lake Traverse he is certainly going to have a good time. Here the great point of interest is the majestic semi-circle of mounds just above the southwestern bluffs.

Last year there were several congenial companions with me, and out the least event on our program was an excursion to dig in the mounds, for huge skeleton may be found if one has enough patience. We climbed the long slope and immediately went to work. The pit into the top of Cheops-so called after other Cheops on the banks of the Nile-grew so deep that we were forced to stand aside and shovel out the loosened earth. It was my turn to dig when one of the boys stepped too near the edge and made a small landslide was in full working order.

When it had stopped and the dust had cleared away i looked to see what damage was done, and there set in the earthen wall was an object i never expect nor want to see again-a huge skeleton in erect position with its hanging jaw grinning hideously.

For a long time i stood astonished and could not move. The thing was now very loosely set and suddenly it fell forward; its huge arm seemed about to seize me when i gave a shriek, clambered up and set out for the camp. By the chorus of shrieks emitted as the boys look to see what i had so frightened me i knew that they appreciated the humor (?) of the situation.

OK. . . First let me state my skepticism on the story, after all this is coming from a 12th grader. Next i couldn’t understand the location, was it the simi-circle mounds in Lake Traverse Minnesota and why does the story seem to take a left turn to Egypt.   OK this one ranks highly improbable. This one is fiction, however there are curious elements of real places it seems which are locally, could this be a real story that happened in Minnesota, at Lake Transverse while camping? The turn into Egyptian fiction, may be a way of denying that these young grave-robbers broke a federal law. It starts out in reality and the writer does a double take, did this kid uncover a huge skeleton? Did he keep it hush? Is this an almost admiiance, a freudian slip?

“dig in the mounds, for huge skeleton may be found if one has enough patience” this is the part that is non-fictional.