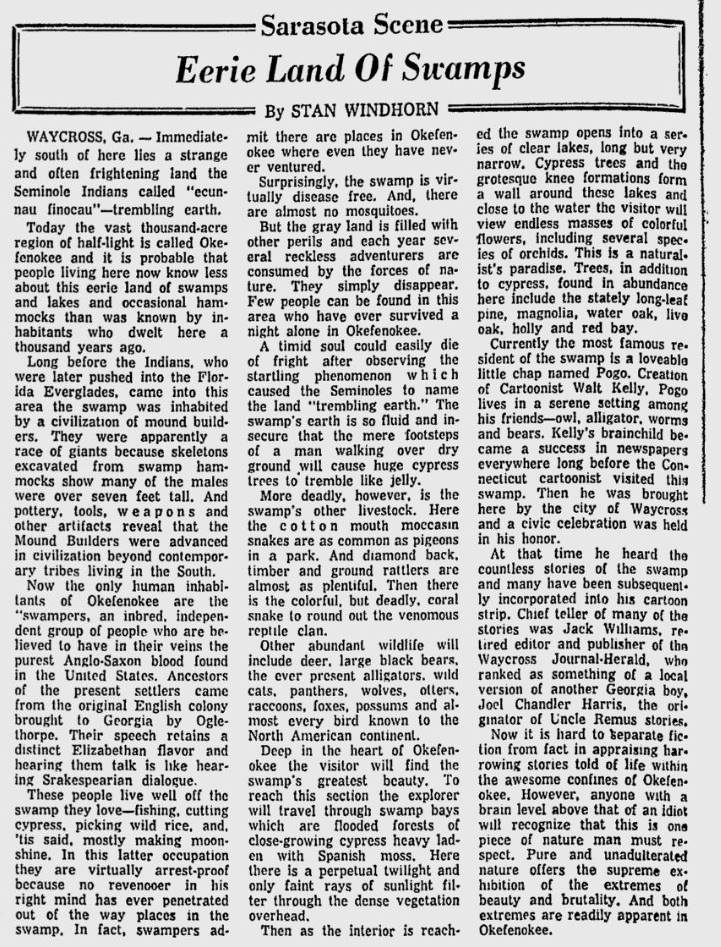 Today the vast thousand acre region of half-light is called Okefenokee and it is probable that people living here now know less about this eerie land of swamps and lakes and occasional hammocks than was known by inhabitants who dwelt here a thousand years ago.

Long before the Indians, who were later pushed into the Florida Everglades, came into this area the swamp was inhabited by a civilization of mound builders. They were apparently a race of giants because skeletons excavated from swamp hammocks show many of the males were over seven feet tall. And pottery, tools, weapons and other artifacts reveal that the Mound Builders were advanced civilization beyond contemporary tribes living in the South .

Now the only human inhabitants of Okefenokee are the “swampers, an inbred, independent group of people who are believed to have in their veins the purest Anglo-Saxon blood found in the United States. Ancestors of the present settlers came from the original English colony brought to Georgia by Oglethorpe. Their speech retains a distinct Elizabethan flavor and hearing them talk is like hearing Shakespearian dialogue.

These people live well off the swamp they love – fishing, cutting cypress, picking wild rice. and, ’tis said, mostly making some moonshine. In this later occupation they are virtually arrest-proof because no revenooer in his right mind has ever penetrated out of the way places in the swamp. In fact, swampers admit there are places in Okefenokee where even they have never ventured.

Surprisingly the swamp is virtually disease free. And there are almost no mosquitoes.

But the gray land is filled with other perils and each year several reckless adventurers are consumed by the forces of nature. They simply disappear.

Few people can be found in this area who have ever survived a night alone in Okefenokee.

A timid soul could easily die of fright after observing the startling phenomenon which caused the Seminoles to name the land “trembling earth.” The swamp’s earth is so fluid and insecure that the mere footsteps of a man walking over the dry ground will cause huge cypress trees to tremble like jelly.

More deadly, however, Is the swamp’s other livestock. Here the cotton mouth moccasin are as common as pigeons in the park. And diamond back timber and ground rattlers are almost as plentiful. Then there is the colorful but deadly, coral snake to round out the venomous reptile clan.

Deeo in the heart of the Okefenokee swamp the visitor wll find the swamp’s greatest beauty. To reach this section the explorer will have to travel through swamp bays which are flooded forests of close growing cypress heavy laden with Spanish moss. Here there is a perpetual twilight and only faint rays of the sunlight filter through the dense vegetation overhead.

Then as the interior is reached the swamp opens into a series of clear lakes, long but very narrow. Cypress trees and the grotesque knee formations form a wall around the lakes and close to the water the visitor will view endless masses of colorful flowers, including several species of orchids. This is a naturalist’s paradise. Trees, in addition to the cypress, found in abundance here include the stately long-leaf pine, magnolia, water oak, live oak, holly and red bay.

Currently the most famous resident of the swamp is a loveable little chap named Pogo. Creation of Cartoonist Walt Kelly, Pogo lives in a serene setting among his friends-owl alligator, worms and bears. Kelly’s brainchild became a success in newspapers everywhere long before the Connecticut cartoonist visited the swamp. Then he was brought here by the city of Waycross and a civic celebration was held in his honor.

At that time he had heard the countless stories of the swamp and many have been subsequently incorporated into his cartoon strip. Cheif teller on many of the stories was Jack Williams, retired editor and publisher of the Waycross Journal-Herald, who ranked as something of a local version of another Georgia boy, Joel Chandler Harris. the originator of Uncle Remus stories.

Now it is hard to separate fiction from fact in appraising harrowing stories told of life within the awesome confines of Okefenokee. However, anyone with a brain level above that of an idiot will recognize that this is one piece of nature man must respect. Pure and unadulterated  nature offers the supreme exhibition of the extremes of beauty and brutality, and both extremes are rapidly apparent in Okefenokee.

More research is needed-Sarasota is a place that i lived for about 10 years and this swamp is just outside the borders of my current city Jacksonville Florida.

The Okefenokee swamp is the green area just below Waycross to Lake City Florida.