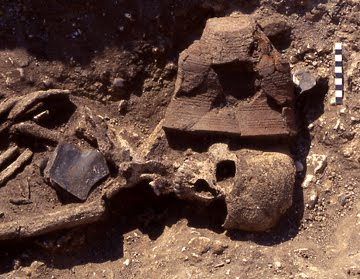 One of the specific reports I knew about from the beginning was a report from Indiana in the 1920s. In 1925, several amateurs digging in an Indian mound at Walkerton, Indiana, uncovered the skeletons of eight very ancient humans measuring in height from eight to almost nine feet. All eight giants had been buried in “substantial copper armor.” This was a report I alluded to in the podcast although I did not have the reference before me then. This case and many other cases like it are cited on this web page:
“Accounts of Giants in North America”

SOUTH BEND, Indiana, – Eight Skeletons, one of them clad in copper armor, and a hoard of rare war weapons and bits of personal adornment have been found in a mysterious mound on the farm of Grove Vosburg, near Walkerton.

Vosburg, a 70 year old farmer, had long desired to know the secret of that mound, which according to local tradition dates back hundreds of years. Secretly excavating this pile of earth he came upon a strange burial place.

The eight skeletons lay in a circular formation, arranged like the spokes of a  wheel, with skulls together. Copper breastplates, bands and other bits of armor adorned the skeleton of one man, who apparently had been of giant stature. Embedded in this skull was a beautifully chipped flint arrowhead.

The soft earth of the mound revealed other treasures. Three pounds of ore, believed to be either silver or white gold, lie with the bones. There were corroded copper bands, which antiquarians here believed were used to bind war clubs; two pipe bowls, one of smooth black stone, and the other carved with a replica of a fantastic monster, were found.