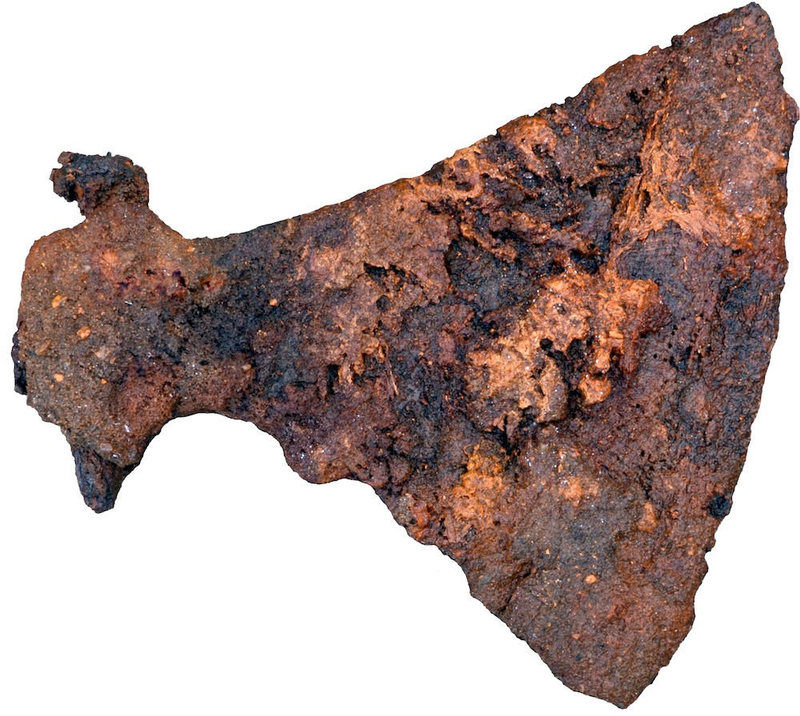 THE Viking ‘berserker’ warrior has long been considered a myth — but the discovery of an enormous battle-axe at a burial site in Denmark suggests otherwise.

The man was buried with what LiveScience calls

“one of the largest Viking axes ever found.”

it’s much bigger and heavier than the other axes.

It would have had a very long handle, and it took both hands to use it,” Nielsen . …and then some.

IT seems there’s some truth in the myths after all.

Archaeologists in Denmark have found the burial site of a Viking ‘berserker’ warrior — complete with an oversized battle axe.

Like the iconic horns on their helmets, the image of a raging Viking wading through his enemies with an enormous axe has long been regarded as the product of overactive artistic imaginations.

Now it appears not.

One of the biggest Viking axes ever has been found inside a recently excavated dødehuse (death house) in south west Denmark, a type of tomb with separate timber ‘rooms’.

It was the sole possession found among the bones of
a particularly strong man.

“It’s a very large axe and would have been a formidable weapon,”

“People across Europe feared this type of axe, which at the time was known as the Dane Axe — something like the ‘machine gun’ of the Viking Age.”

His findings, Dead and buried in the Viking Age, have been published by the Saxo Institute at the University of Copenhangen.

The axe is unadorned, suggesting it was a real weapon of war and not ceremonial. After more than 1,000 years, only the head of the axe remains, but it would have had a long handle, according to the archaeologist who discovered it. 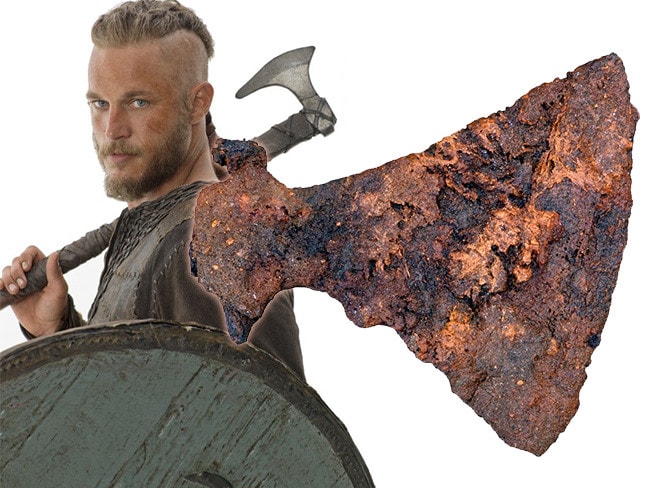 It would have been a fearful weapon,

and since it’s not adorned in any way, it looks to be a weapon meant for use, rather than show.

That it was the only object buried with him also suggests he saw himself to be a warrior above all else.

The corroded but unusually heavy and large Viking battle axe recently found in Denmark, inset, with one of more common dimensions as shown in the BBC drama Vikings.Source:Supplied

Around the year 950 A.D., in a place near the center of what is now Denmark, a pair of important people were buried in an impressive tomb.

Where the warrior was buried with his axe, the woman found in the dødehuse’s second room was interred with a set of keys.

“One is a symbol of her power and status as a great lady, the other fits a small square shrine that was also buried with her and is quite rare,” Nielsen told ScienceNordic.

She had been buried inside a wagon of a type believed used by nobility. Combined with the markings on the grave itself, these objects suggests she and the man buried along side her must have held high status.

A ‘normal’ sized battle axe was found with this man, along with ceramics from the Baltics and two silver coins from Afghanistan.

This bursts the myth that Vikings were a male-dominated society.

I read this article from multiple languages hoping to find some new information. So far, there are no measurements that i have found of the axe. There are no measurements of the “warrior’s” height. It said that the viking was the largest ever found, and leaves it there. Hopefully i can find the measurements in another article, and possibly the size of the warrior that wielded it.
It is curious that these significant details are left out, the question is why? Some articles like the “giant skeleton found in China” which turns out to a little short in stature, is probably just a form of counter-intelligence to throw people off on the standard of height required to be called a giant. Hopefully some new info. will turn up until then this is just a disappointing stub.