Smyrna Daily News Jan. 5, 1917–“That human beings inhabited the North American continent more than 125,000 years ago has been conclusively proven through a recent discovery in this state by E. H. Sellards, state geologist, and Prof. Oliver P. Hay who have made a study of the fossil. Though their opinions are not fully concurred in by other scientists, they are positive that their researches have been thorough and there is no room for a mistake. 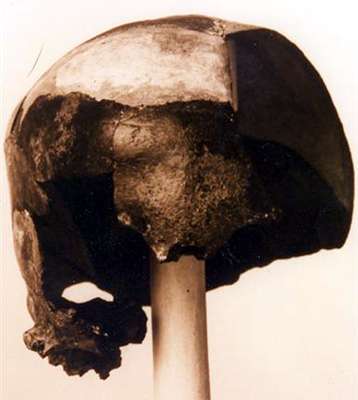 The discovery was made several months ago, and though nothing of a definite nature had been given out until recently, it is now officially stated that human bones intermingled with those of the mastodon, saber tooth tiger, and many other extinct animals that formerly ranged this hemisphere have been found. The deposit was found near Vero.

That the human beings were of enormous size is evidenced by the bones. It is thought that some were ten or twelve feet in height. Some excellent specimens of the skeleton of these gigantic men have been found, some of them locked in the deadly embrace of great animals, with strange weapons of bone clutched in skeleton hands a foot long.”