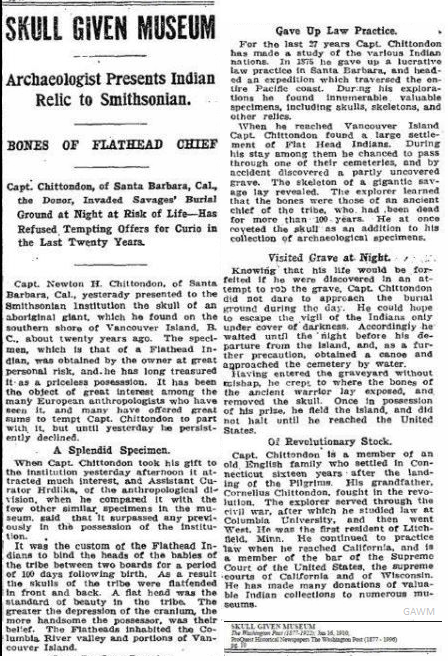 The Giant’s Skull was donated to the Smithsonian Institution

Capt. Newton H. Chittendon, of Santa Barbara Cal., yesterday presented to the Smithsonian Institution the skull of an aboriginal giant, which he found on the southern shore of Vancouver Island, B. C., about 20 years ago. The Specimen, which is that of a Flathead Indian, was obtained by the owner at great personal risk, and he has long treasured it as a priceless possession. It has ben an object of great interest among the many European anthropologists who have seen it, and many have offered great sums ti tempt Capt. Chittondon to part with it, but until yesterday he persistently declined.

When Capt. Chittondon took his gift to the institution yesterday afternoon it attracted much interest, and Assistant curator Hrdlika, of the anthropological division, when he compared it to a few other similar specimens in the museum, said that it surpassed any previously in the possession of the institution.

It was the custom of the Flathead Indians to bind the heads of the babies of the tribe between two boards for 100 days following birth. As a result the skulls of the tribe were flattened in front and back. A flat head was the standard of beauty in the tribe. The greater the depression of the cranium, the more handsome the possessor, was their belief. The Flatheads inhabited the Columbia River valley and portions of Vancouver Island.

For the last 27 years Capt. Chittondon has made a study of the various Indian nations. In 1875 he gave up a lucrative law practice in Santa Barbara, and headed an expedition which transversed the entire Pacific coast. During his explorations he found innumerable valuable specimens including skulls, skeletons, and other relics.

When he reached Vancouver Island Capt. Chittondon found a large settlement of Flat Head Indians. During his stay among them he chanced his stay to pass through one of their cemeteries, and by accident discovered a partly uncovered grave. The skeleton of a gigantic savage lay revealed. The explorer learned that the bones were those of an ancient chief of the tribe, who has been dead for more than 100 years. He at once coveted the skull as an addition to his collection of archeological specimens.

Knowing that his life would be forfeited if he were discovered in an attempt to rob the grave, Capt. Chittondon did not dare to approach the burial ground during the day. He could hope to escape the vigil of the Indians only under cover of darkness. Accordingly he waited until the night of his departure from the island, and, as a further precaution, obtained a canoe and approached the cemetery by water.

Having entered the graveyard without mishap, he crept to where the bones of the ancient warrior lay exposed, and removed the skull. Once in possession of his prize, he fled the island, and did not halt until he reached the United States.

Capt. Chittondon is a member of an old English family who settled in Connecticut sixteen years after the landing of the Pilgrims. His grandfather, Cornelious Chittendon, fought in the revolution. The explorer served through the civil war, after he had studied law at Columbia University, and then went West. He was the first resident of Litchfield Minn. He continued to practice law when he reached California and of Wisconsin. He has made many donations of valuable Indian collections to numerous museums.