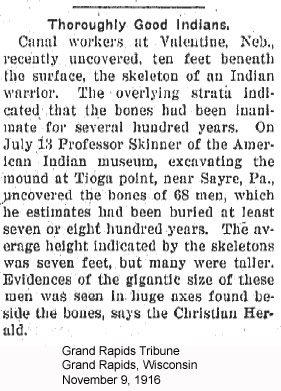 Canal workers at Valentine, Neb., recently uncovered, ten feet beneath the surface, the skeleton of an Indian Warrior. The overlaying strata indicated that the bones had been inanimate for several hundred years. On July 13 Professor Skinner of the American Indian Museum, excavating the mound at Tioga point, near Sayre, Penn.’ uncovered the bones of 68 men, which he estimates had been buried at least seven or eight hundred years. The average height indicated by the skeletons was seven feet, but many were taller. Evidence of the gigantic size of these men was seen in huge axes found beside the bones, says the Christian Herald.