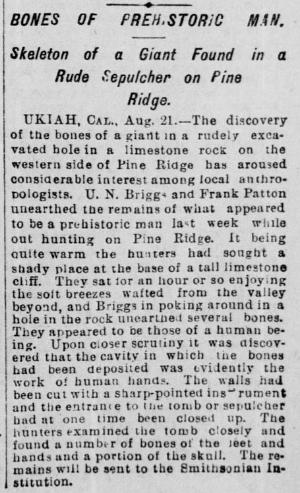 Skeleton of a Giant Found in a Eude Sepulcher on Pine Ridge.

UKIAH, Cal., Aug. 21.— The discovery of the bones of a giant in a rudely excavated hole in a limestone rock on a western side of Pine Ridge has aroused considerable interest among local anthropologists. U.N. Brigg and Frank Patton unearthed the remains of what appeared to be a prehistoric man last week while out hunting on Pine Ridge. It being quite warm the hunters had sought a shady place at the base of a tall limestone cliff. They sat for an hour or so enjoying the soft wafted from the valley beyond, and Briggs in poking around in a hole in the rock unearthed several bones. They appeared to be a bone of a human being. Upon closer scrutiny it was discovered that the cavity in which the bones had been deposited was evidently the work of human hands. The walls had been cut wth a sharp pointed instrument and the entrance to the tomb or sepulcher had at one time been closed up. The hunters examined the tomb closely and a portion of the skull. The remains will be sent to the Smithsonian Institution.