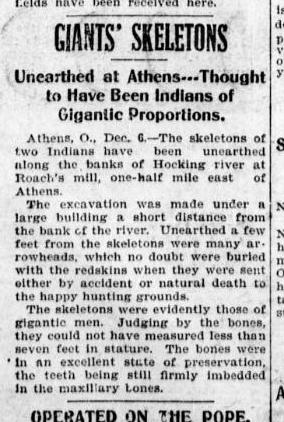 Unearthed at Athens… Thought to have Been Indians of Gigantic Proportions.

Athens, O., Dec. 6.-The skeletons of two Indians have been unearthed along the banks of Hocking river at Roach;s mill, half mile east of Athens. Athens

The excavation was made under a large building a short distance from the bank of the river, Unearthed a few feet from the skeletons were many arrowheads, which no doubt were hurled with the redskins when they were sent either by accident or natural death to the happy hunting grounds.

The skeletons were evidently those of gigantic men. Judging by the bones, they could not have measured no less than seven feet in stature. The bones were in an exc 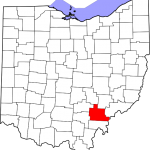 ellent state of preservation, the teeth being still firmly imbedded in the maxillary bones.