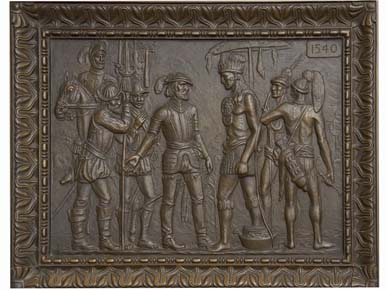 records describe the paramount chief as being very tall and well built, with some of the chroniclers saying Tuaskaloosa stood a foot and a half taller than the Spaniards. His name, derived from the western Muskogean language elements taska and losa, means “Black Warrior”.[1]

[Tuskaloosa]’s appearance was full of dignity he was tall of person, muscular, lean, and symmetrical. He was the suzerain of many territories, and of numerous people, being equally feared by his vassals and the neighbouring nations. 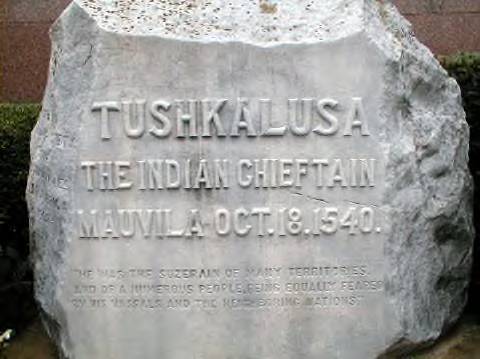 Chief Tuscaloosa was a giant of a man, over 7 feet, standing a foot and a half above the Spaniards. At night fall the Chief began to prepare to leave and return to his village, but de Soto objected and took him into custody, thus making a formidable enemy.

On these marches the cacique in custody always rode
alongside the governor. So De Soto ordered a horse for Tuscaloosa. But owing to the cacique’s huge size and great weight, not even the largest horse they brought forward was able
to bear him. At last, a pack horse accustomed to heavy burdens proved strong enough to carry the chief. But when he mounted Tuscaloosa’s feet almost touched the ground. This
description accords with Garcilaso de la Vega’s statement that the chief stood a half-yard taller than the tallest men around him.