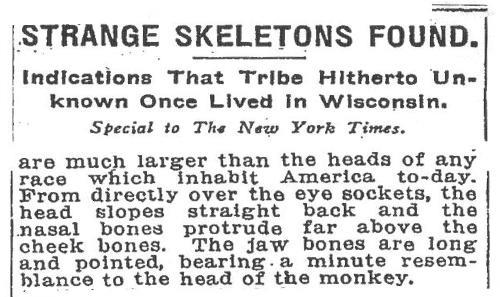 Indications that tribe hitherto Unknown once lived in Wisconsin.

are much larger than the heads of any race which inhabit America to-day. From directly over the eye sockets, the head slopes straight back and the nasel bones protrude far above the cheek bones. The jaw bones are long and pointed, bearing a minute resemblance to the head of a monkey. tribe.

From this article it cam be assessed that the onlookers were looking at elongated skulls like the ones in Paracas and Peru.

It is a misnomer to thing that because of the heads said to be minutely similar to a monkey may be how one might describe an elongated skull. Far from being the size of a monkey skull, but having mature eyebrows and a sloping skull in shape.

“the nasel bones protrude far above the cheek bones.” These facial patterns are the same as the elongated skulls from Paracas and other skulls all over the globe.