Trempealeau County – THAT OF A GIANT 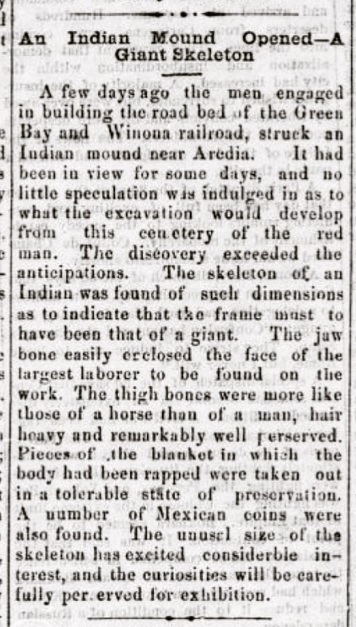 A few days ago the men engaged in building the road bed of the Green Bay and Winona railroad, struck an Indian mound near Arcadia. It had been in some view for some days, and no speculation was indulged in as to what the excavation would develop from this from this cemetery of the red man. The discovery exceeded the expectations. The skeleton of an Indian was found of such dimensions as to indicate the frame must have been that of a giant. The jaw bone easily enclosed the face of the largest laborer to be found on the work. The thigh bones were more like that of a horse than a m

hair heavy and remarkably well preserved. Pieces of blanket in which the bod

y had been wrapped were taken out in a tolerable state of preservation. A number of Mexican coins were

also found. The unusual size of the skeleton has excited considerable interest, and the curiosities will be carefully preserved for exhibition.