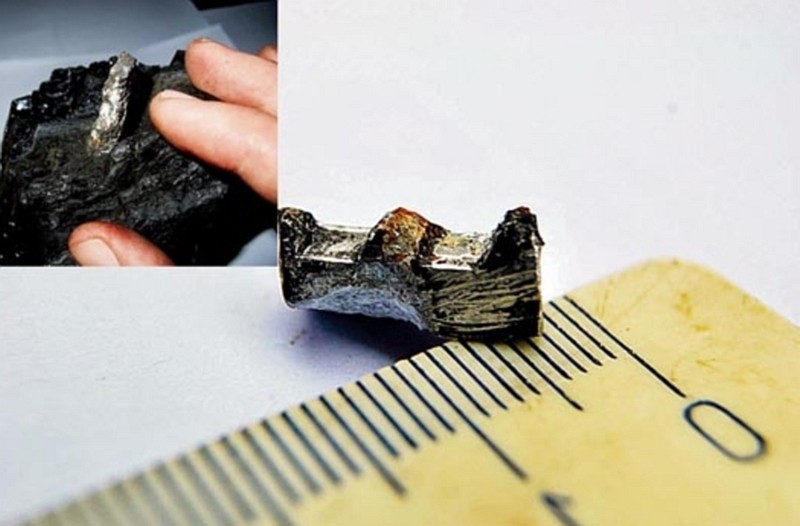 “Lighting the fire during a cold winter evening at resident of Vladivostok.

which was pressed in one of the pieces of coal

that the man used to heat his home. He was Mesmerized by his discovery. This responsible citizen decided to seek help from the scientists of Primorye region. After the metal object was studied by the leading experts, the man was shocked to learn about the age of his discovery. The metal detail was supposedly 300 million years old and yet

Scientists suggest that it was not created by nature but was rather manufactured by someone.

The question of who might have made an aluminum gear in the dawn of time remains unanswered.

Today finding a strange artifact in coal is a relatively frequent occurrence.

The metal object was pressed into the coal. The coal was delivered to Primorye from Chernogorodskiy mines of Khakasia region. This dates to about 300,000 years. Russian experts inferred that the metal detail found in these deposits must be an age-mate of the coal.

When geologists broke the piece of coal spot-treated in with special chemical agents. It turned out that the metal detail was unusually light and soft. No more than seven centimeters long,

The object was found to be composed of 98 percent aluminum and 2 percent magnesium.

An alloy stalled the scientists because nearly pure aluminum is very rarely found in nature. Thus, the detail was most definitely created artificially.

Pure aluminum is increasingly prone to oxidization. This contributes to the creation of a special layer protecting it from further corrosion. As a result, the metal detail made 98 percent from aluminum. It can endure not only high pressure but also heat and other severe conditions.

The last property of the object that puzzled the scientists was its distinctive shape. This which was reminiscent of a modern tooth-wheel.

It is impossible to imagine that an object could take regular shape of a tooth-wheel. Especially one with six identical ‘teeth’ occurring naturally.

The intervals between the ‘teeth’ of the gear are curiously large in relation to the size of the ‘teeth’ themselves which might mean that the detail was a part of a complicated mechanism. Nowadays, such ‘spare parts’ are used in construction of microscopes and other mechanical appliances. This poses yet another unanswerable question : how can the metal tooth-wheel be 300 million years old if the regular-shaped ‘wheel’ itself was created by man millions of years later.

Conspirators were quick to dub it ‘a UFO tooth-wheel’. Russian scientists, however, do not jump to conclusions and will run further tests to learn more about the strange artifact.”

This is just one more item which demonstrates that the pantheistic or long-age time-line popularized by evolutionists is grossly inaccurate.