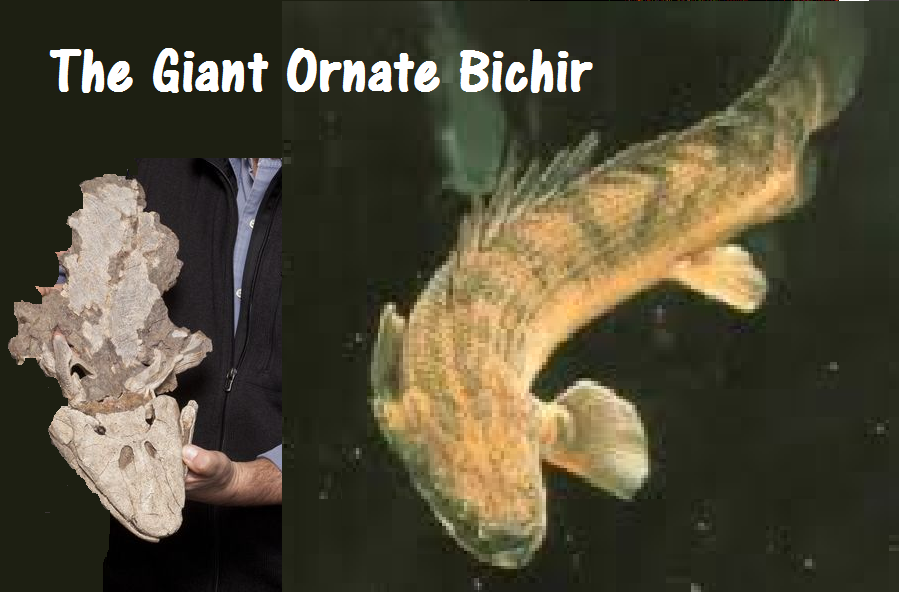 The great ( or not so great) Tiktaalic Rosea hoax.

Tiktaalik Rosea is not the highly touted link between fish and reptile, as lying agenda driven

paleontologists would have us believe. Only a skull, a fin, ribs and a few vertebrae were discovered. Tiktaalik is supposed to be “the missing link”, an example of “common ancestry” however what it does show is that animals devolve. From mudskippers, walking catfish to ornate bichir’s these fish are not closer to salamanders and other amphibians in fact the presence of walking fins do not even constitute a weak argument much less an intelligent one. Why because these fins are , . . . are you ready . . . . ON THEIR FACE! . . . thats right, these fins attach to their face. The fins attach not off of the thoracic vertabrae as in salamanders, . . . oops!

This is an elementary approach. Any biologists worth their salt with an understanding of 1st year Biology (say 5th grade) should be clever enough to know that this is not a good deception. This is a very unique design and the wrong fins are being walked on. These “fishopod” fins with a few digits added through imagination attach to the jawbone. Maybe the Darwin fish icon needs a change. 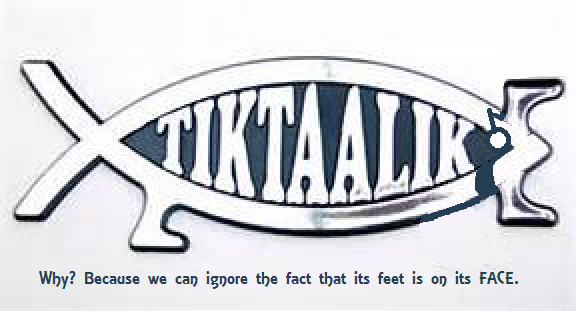 Tiktaalik is merely a species of ornate bichir, a freshwater tropical fish found in Africa and available in many tropical fish stores.

They are a type of lungfish that can walk and breathe on land for short periods of time. These creatures can get up to 21 inches in length, . . . rarely. This is obviously very small compared to the 4 feet long tiktaalik. Evolutionists have an affinity with macrocephalic creations. If a giants head was found and went public they would attack it to the body of a child. This is often done in the animal kingdom (with fossils) with no observation and imagination coupled with faith reigns in evolutionary illustrators. Evolutionary illustrators are in fact fantasy illustrators.

It is true that tiktaalik’s eyes are closer together than the eyes of the ornate bichir. (quite perceptive) yet you didnt notice the limbs are attached to the jaw, . . . anyway. The skull seems squashed, like it was stepped on and

collapsed inward. This is not too uncommon as there is another skull hailed as a new fish species Laccognathus embryi, from Latvia in which the skull was distorted and hailed as a new species. . . .which is often the case with distorted skulls.

“But now this footprint evidence from Poland and Coconino consigns Tiktaalik and all its companion fossils onto the garbage heap. From being stars of the show they have suddenly become an evolutionary dead-end.

So the creationists were right all along.”

“At first glance the evidence does not look very impressive. The tracks are preserved as shallow indentations on the surface of large limestone slabs from Zachelmie Quarry in the Holy Cross Mountains of Poland. The rough surfaces have an array of roundish indentations arranged in lines (figure 2). But, with the use of lines and diagrams (figure 3), the authors have argued a strong case that these indentations are indeed trackways of four legged animals that resembled large lizards….”

“The reason the evolutionary community rejects the Tapeats sandstone footprints as genuine tetrapod tracks is because they refute evolutionary theory, placing tetrapods 200 million years prior to the alleged evolution of the fishapods. Instead, this is powerful evidence that tetrapods have been around since the beginning of time, and that there is no evolutionary sequence. The evidence shows that creation is the faith that fits the facts, and evolution is the faith which has failed to fit the facts.

Finally, my short response is with my own question: How now is Tiktaalik evidence that fishes evolved into land creatures?” 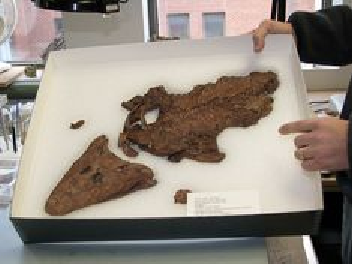 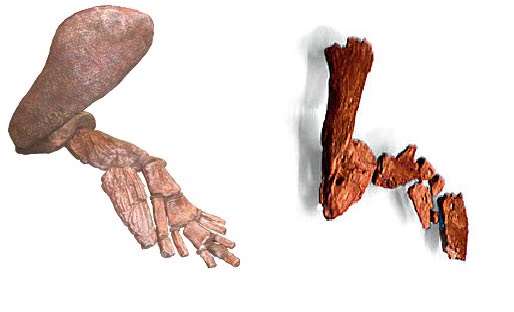 A question that should be asked is the fossil broken or unbroken, was it found separate and then staged, are we looking at a typical evolutionary jackalope?

Here is the reconstruction by imagination on the left (not reality) and miscellaneous fragments that have actually been found. No conspiracy here, just magical amphibian-like toes appearing from nowhere.

Professor Jennifer Clack, from the University of Cambridge, said
that the find could prove to be as much of an “evolutionary icon” as Archaeopteryx – an animal believed to mark the transition from reptiles to birds.”

Well, there you have it, one bad example to endorse another bad example.