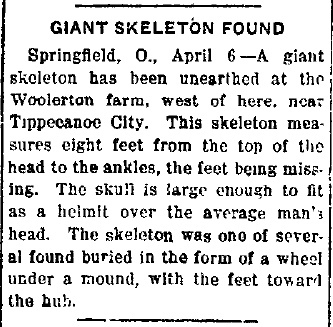 Springfield, Ohio, April 6 – A giant skeleton has been unearthed at the Woolerton Farm, west of here near Tippecanoe City. This skeleton measures eight feet from the top of the head to the ankles, the feet being missing. The skull is large enough to fit as a helmet over the average man’s head. The skeleton was one of several found buried in the form of a wheel under a mound, with the feet towards the hub.