Tiahuanaco had been constructed by a race of giants 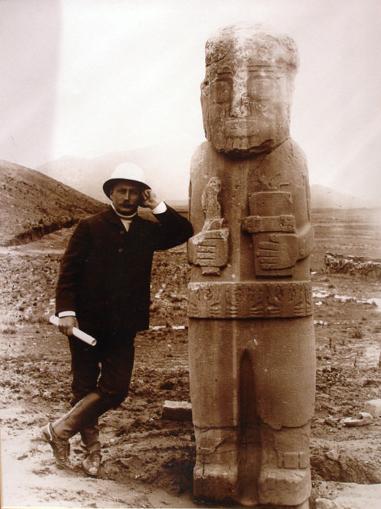 Mammoth traces of ancient intelligence carved in stone and covering hundreds of square miles
at found at Tiahuanaco.  These are only seen from an ariel viewpoint and is evidence of
prehistoric engineering by earth’s former giant citizens.
“There are magnificent artificial lake systems and large dams and canals. On the stones rising from the ancient water level are carved figures that once cast curious shadows on the surfaces of sacred lakes. Strangely enough, there is a small lake on the plateau today called `Black Lagoon’, and out of its centre rises the perfectly carved head of a scaly dinosaur-like monster as if it were just breaking the surface, resting its enormous, ponderous body on the bottom.”
“As in the case of the Nazca lines of Peru, the Tiahuanaco geoglyphs represent hundreds of years in construction and communal effort of thousands. However, unlike Nazca that was constructed in low altitude, the more extensive Tiahuanaco geoglyphs lie in a region that cannot support a population capable of producing such vast works, existing on a plain 12,500 feet above sea level and higher. Never the less, they saturate the country side for hundreds of square miles, a fact that presents enormous architectural difficulties…”“When the first Spanish chroniclers arrived with the conquistador Pizaro, the Inca explained that Tiahuanaco had been constructed by a race of giants, called “Huaris”, before Chamak-pacha, the “period of darkness”, and was already in ruins before their own civilization began…“
from: http://www.unexplained-mysteries.com/forum/index.php?showtopic=124273