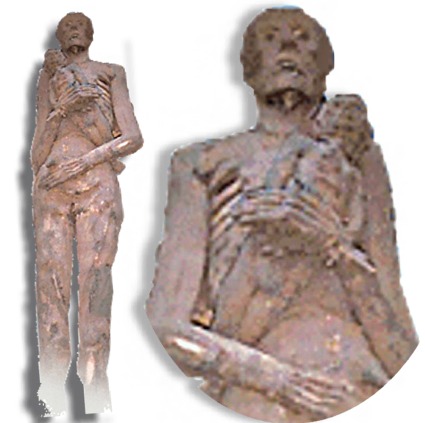 Photo from Ripley’s Believe it or Not who currently host the mummies.

The Giants of Yosemite Valley By Bobbie Short

The year, 1885. In California’s great Yosemite Valley under the misty expanse near Bridal-Veil Falls, a party of silver and wannabe gold miners discovered what was to become the mystery of the decade. While having lunch, Mr. G. F. Martindale who was in charge of a party of miners, noticed a pile of stones that was placed against the wall of a cliff.

Seasoned miners, they were familiar with the natural formation of rock, this particular grouping struck Mr. Martindale as being unusual and seemed not to have been placed naturally. Realizing that if something in the wild is not placed naturally, he could only conclude human hands placed it there.

The miners set about removing the pile of stones. Behind the pile of stones they found a wall of rock that had been shaped and joined together with knowledgeable masonry. The joints between the rocks were all of uniform 1/8 of an inch in thickness and according to the reports from the men who were there, it was a beautiful job of stone work.

“As pretty as any wall on any building that I have ever seen” is the way one miner described it. Thinking that they had perhaps stumbled upon some lost treasure, the party of miners proceeded without delay and issuing great haste began tearing down the wall to get to the incredible riches that surely must lie within.

Disappointment fell heavily upon their heads as, in the end, they found the vault empty save a very large mummified corpse that lay on the ledge, which was carved from the natural stone for the express purpose of burial.

Lighting their carbide headlamps they set about examining the vault to see if perhaps they had overlooked something perhaps a map or some other clue to where the inevitable treasure might be hidden. Treasure of course being far more interesting than the fossil bones of a giant mummy.

What they found was another vault that had been carved from natural rock – 9 feet 3 inches high, 18 feet 6 inches deep and 8 feet 4 inches wide – containing a tall mummified corpse that was 6 feet 8 inches tall. The corpse was wrapped in what appeared to be animal skins and covered with a layer of fine gray power.

The miners removed parts of the animal skins to view the corpse and found it to be that of a woman holding a child to her breast.

The mummy was then taken to Los Angeles where it was placed before men, considered to be of great science in those days, most of whom agreed that is was a “relic” from a race that must have inhabited this country long before the American Indian. Tall people, they claimed, from a race which preceded the coastal natives?

All agreed that the height of 6 feet 8 inches tall in death must have represented an actual height in life of about seven or more feet. If their height relationship between men and women was approximately what it is today, then they concluded the males of the species could possibly have been some eight feet tall.

The most popular theory of the day was that the lady was a relic of some royal family of a lost Stone Age tribe of giants.

Interestingly enough, Captains Cooke and Magellan both wrote in their ship’s logs of a race of giants that inhabited what we now know as the Pacific coast of South America. Cook was even supposed to have captured one of the giants reported to be nine feet tall.

Unfortunately, the giant escaped by breaking the ropes that bound him to the mast and jumped off the ship, overboard into the sea.

In an additional excerpt, Capt. Cooke wrote in his log that he was himself was 6 feet 3 inches tall, (which was very tall for those days when the average was about 5 feet 4 inches tall and under) and he could easily stand under the arm of the giant.

Cooke’s report started a furor that was to last another 100 years and cause many to seek these giant people.

In the next century, many reports were filed stating that various of our major explorers had sighted the giants of what was then called Patagonia – but none had contact or for that matter even attempted to capture one of the giant men. Then suddenly, around the year 1650, the reports of sighting giants stopped abruptly.

Perhaps the giants moved inland, perhaps because they moved far away. They couldn’t have just vanished. They could have simply become unpopular attractions and thus slipped gradually into oblivion. The fact remains that once up a time, they were there.

The Yosemite Valley, where the mummy was found has always been considered to be a place of great mystery by the Indians who lived there, the Ahwahneechees. The folklore of the Ahwahneechees relates a story of a giant who came into the valley long before the white man arrived.

The giant’s name was Oo-el-en. They were vicious giants for they liked to eat the meat of the Indians. Oo-el-en would catch the adults and carry them away to a hiding place near the foot of Cascade Falls. Oo-el-en would then cut the people into small pieces, hanging their meat in the sun to dry into jerky.

The legend says that the Ahwahneechees finally killed the giants and burned their bodies. This rules out the possibility that the giant mummy of the Yosemite Valley might have been Oo-el-en.

However, if there was a giant, where did he come from and was there more than one of her kind. We may never know – sadly, all the Ahwahneechees are dead, the last having died in 1947.

The one thing the Ahwahneechees did leave was a written record of their long and complex burial rites. These Indians usually burned their dead – as they believed that by doing so they released the spirit of the deceased more quickly, so as to escape the evil spirits that lie in wait to grab it.

The learned scientist of that time, July of 1895, all agreed that the mummy predated the Christian era. It is therefore doubtful that the mummy was in any way connected with the Indians, as they were believed to have settled in the Yosemite Valley about 800 to 1000 years ago.

It is important to note at this point that the Ahwahneechees were also very small people, most being less than 5 feet 3 inches tall. However, there have been traces of a much earlier people that have inhabited the Southwest�..

1999 by Bobbie Short at BigfootEncounters.com

This report is similar to the two bodies reportedly found at the 7,500 level on Mt.Rainier in 1910. An archaeologist was researching the ice caves located on the mountain.

He noted the unnaturally formed rock pilings, removed them and discovered an opening to a group of descending chambers.

There was an eerie light within that allowed him his viewing of the perfectly preserved bodies of a 7 1/2′ tall man and a 7′ female.

Both were wearing animal skins and carved jewelry. Both were placed upon platforms of carved ice. At the base of these platforms were the bones of children or very small humans. An adjoining lower cave had a small lake with a a skin-type boat on its shore.

The above info is from the archives of Del McBride, Curator Emeritus of the Washington State Historical Museum in Olympia.

Del passed on last year, but he was my beloved cousin and knowing of my interest in such infos he had sent me the entire report from the local newspaper reporting of same in 1910. It is (somewhere) in my genealogy files.

ADDENDA:“The article by Bobbie Short on giants of the Yosemite has errors in it. The last Ahwahneechees did not die in 1947. Alice and West Wilson were alive in the 1960’s. I work with them in Yosemite and listened to many tales during and after work.

John Bingaman wrote a book about the Yosemite Indians in 1966. He was the District Ranger for many years in Yosemite. Shirley Sargeant is another that should know about the last Yosemite Indians. She spent a life time writing about Yosemite….Fred Dawson