The world’s biggest ever tapir! 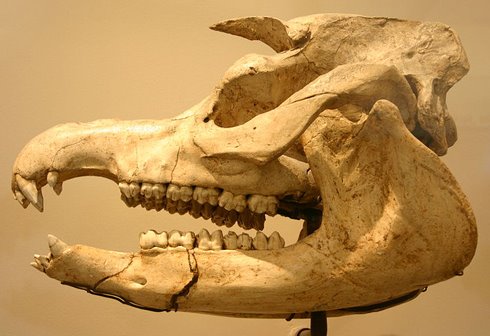 The world’s biggest ever tapir!

. . . Here’s a little bit of information about the world’s biggest ever tapir, Tapirus augustus Matthew & Granger, 1923, the Pleistocene Asian species formerly known as Megatapirus (it’s best known from southern China, but has also been reported from Java and Vietnam. Incidentally, some authors say that it survived into the Holocene).

Some people estimate that this tapir was about 3.5 m long, and 1.5 m tall at the shoulder. Wow!

I therefore assume that the skull shown above  is a heavily restored version of AMNH 18433, the type skull from Matthew & Granger (1923) [help me out if you know more]. Estimated skull length is 53 cm. The nasals are particularly high set compared to those of living tapirs: this might explain why the animal in the picture above has been given an especially large proboscis.

Many fossil tapirs were essentially similar to the modern species.

However, some – like T. augustus – were evidently much larger,

Dong, H. 2005. Dental characters of the Quaternary tapirs in China, their significance in classification and phylogenetic assessment. Geobios 38, 139-150.

This a big Tapir no doubt, i usually cross reference before i make the claim that an individual is the largest. Notice the “look of maturity”, a “low neotony” compared to the weaker descendants of today.

Most people when looking at the megafauna make two incorrect assumptions:

1) “that the animal is extinct” NOT! this is a more mature tapir and greater ancestor to the living tapirs today. Extinction mostly is a way of getting rid of 90 % of the fossil record instead of allowing the fosssil record to bring you to a devolutionary conclusion.

The environment deals with the phenotype, and doesn’t transfer to later generations that is why evolution and some Creation science is stagnant because neither deals with generational changes. Devolution does. My criticism only goes to those looking for a environmental explanation. Environmental changes can increase the size of a creature, . . .slightly but reproducing the environment does NOT! get us to creatures like this. Viva La Devolution!