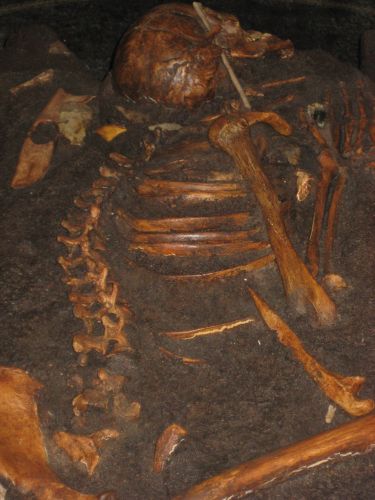 Windover Pond, the site in Brevard County, Florida, near Titusville.

Discovered in 1984, by a backhoe operator named Steve Vanderjagt, the shallow bog pond was the burial ground.

The ancient pond’s muck long ago turned to peat, preserving the bones, and to the archaeologists’ amazement, the brains of ninety archaic people. 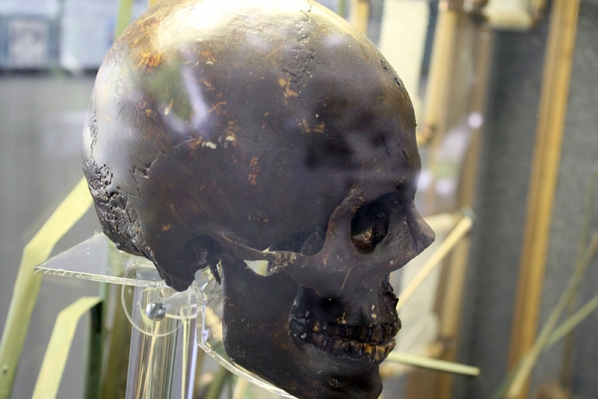 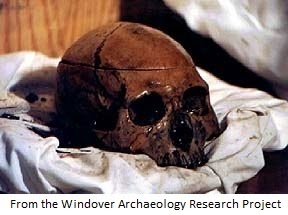 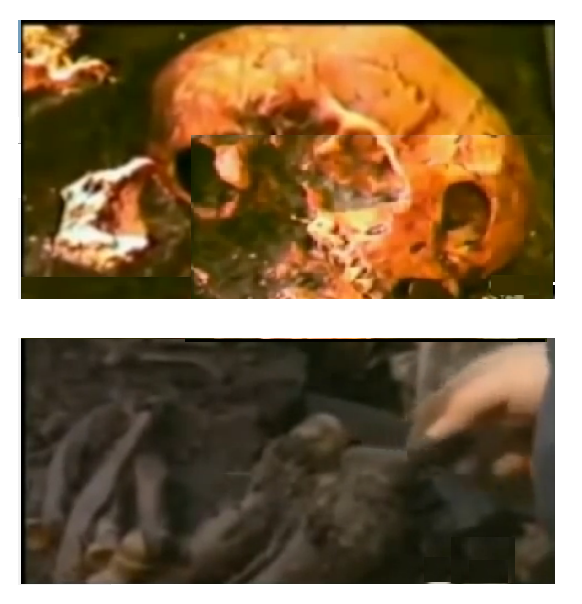 Judging by the skeletons, The average height of adult males was 5 feet 9 inches (175 cm). some of the men were as taller. They were robust and heavily muscled and lived long lives for that period – 65 to 70 years in some cases.

The intact brains recovered from the skulls show a brain size very similar to that of modern man. (large)

According to Doran, this establishes the similarity in intelligence between the Windover Bog People and modern man.   Native American groups have a tradition that spirits of the dead are blocked by water. Tools made of bones and even wooden objects and fabric survived in good condition because of the unusual neutral pH, low acidic balance of the water that preserved it. Interestingly all the ponds close by tested highly acidic in comparison. Fungus and bacteria growth was simply locked out by the peat covering the bodies and the usual process of decay was brought to a standstill. Different hand-woven fabrics made of many different materials of great varieties were recovered showing sophisticated weaving techniques. This activity is consistent in America and all over the world connecting together ancient White cultures.

There was time to weave cloth and fashion tools that would make living easier. Archaeologists were excited to discover complexly woven cloth made of plant fiber, probably palm. The fronds would have been rubbed back and forth until they, became twine-like; then woven, using bone awls to pack the weave tightly. Archaeologists at this site were able to recover a total of 86 pieces of fabric from 37 graves. These included seven different textile weaves.

While a piece of cloth may not seem very important to lay people, to scientists it offers valuable insight into the Archaic people’s daily lives. For example, earlier archaeologists thought that Indians from the Archaic period lived on a bare subsistence level, perhaps gathering only enough food for a day. The intricate weave of the cloth when a simpler weave might have sufficed, however, shows that time was spent on activities other than mere survival and indicates patterns of refined technology and economic stability.

Among the tools of daily life that have been recovered are split conch shells for dipping water, bone awls used as needles, weaving tools, a wooden mortar and pestle used to crush and mix food, shark teeth used for wood carving, and mussel shells used for scraping. Chert spear points indicate trade, since the nearest deposits of this substance was in the Tampa Bay area.

We have learned that they cared for and supported non-productive members of their community. This was confirmed by the discovery of the body of a young man badly crippled from birth, who suffered from spina bifida. For such a child to have survived to adulthood, he had to have received special attention. He obviously had been carried as the group moved about and was fed and clothed even though he was unable to contribute to the physical welfare of the society.

Professor Doran dedicated 14 pages and numerous pictures, tables of his book to the methods and studies of the DNA of the Windover people. His final conclusion is:

“Since the haplogroup frequency distribution of the prehistoric Windover population is unlike that of any known surviving or prehistoric group, they may represent the only demonstrated instance of the recent extinction of a group of Native Americans with no close surviving relatives.”

Dr. Joseph Lorenz from Coriell Institute for Medical Research was also searching hard for the DNA markers typical of “Native Americans” in the DNA samples taken from the bones of five individuals from Windover. He did not find what he was looking for but he did not stop. After comparing the Windover DNA to present European people’s he said:

“Well, it seems the European “Solutreans” surely still had descendants in 5000 BC in Florida! 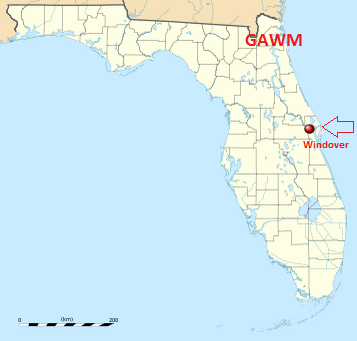 ack in 1984, a building contractor working near Windover Pond in the area of Titusville, Florida came upon NEARLY TWO HUNDRED  well-preserved ANCIENT skeletons and bodies! They had been buried at the bottom of a pond and the pond bottom had become peat, which as elsewhere in the world preserved their bodies in the most amazing manner.

168 bodies in the peat,  were WHITE-SKINNED CAUCASIANS, some with intact brains, clothed in very complex woven textiles! This sight is very near Cape Canaveral!

IMAGINE — they sat on the DNA testing of who these bog people actually were until just recently!”

Well, . . . averaging 5’9″ and several six footers, we should notice that the tale is incomplete without the height of the tallest individual. The average height for modern  man is 5’8″ and 175 lbs. The skeletons are said to be robust and musculature with large heads which are indicators for greater ancestry. I would like to also note that only half of the pond was excavated, the other half is intended to be excavated in future generations. Caucasians across the ocean in a strange land it sounds like Cain’s lineage in the land of Nod. I am certain people traveled the world, all races in the past and are referred to today as the Sea People. Let’s keep an eye on this story, as the next half assuredly will be larger than life.