(text comes from a document reader, and the text has not yet been proofed)
The mummy of the “tallest human
giant who over lived” was being barked by a at the Atlantic exposition
while., a number of these Smithsonian
scientists were there. They asked
permission to examine It and when consent
was given applied their tapes and
found that It measured eight feet four Inches from crown lo heel.
Tho giant had been found In a cave near San Diego. Cal., by a parly of

prospectors, according lo the exhibitor. Ovor i lhe head wero tho remains of a leather hood which appeared to have been part of a shroud. Worn teeth were visible j In tho mouth and the outlines of the ribs were plainly seen through tho skin. Tho elongated, emaciated body stood erect In a great, narrow cofiln. ten feet long. Tho exhibitor agreed to sell it
for $500 to the Smithsonian, which dispatched

Mr. Lucas to ‘the scene. Ilo, Prof. W. J. Mc’Oee, and others made a careful tost. A piece of lhe giant’s dried skin was removed and when tested In the chemical

laboratory of the Smlthsonian was found to bo gelatine. Professor McCee Is shown on tho loft of tho giant, Jn tho accompanying picture, and the exhibitor 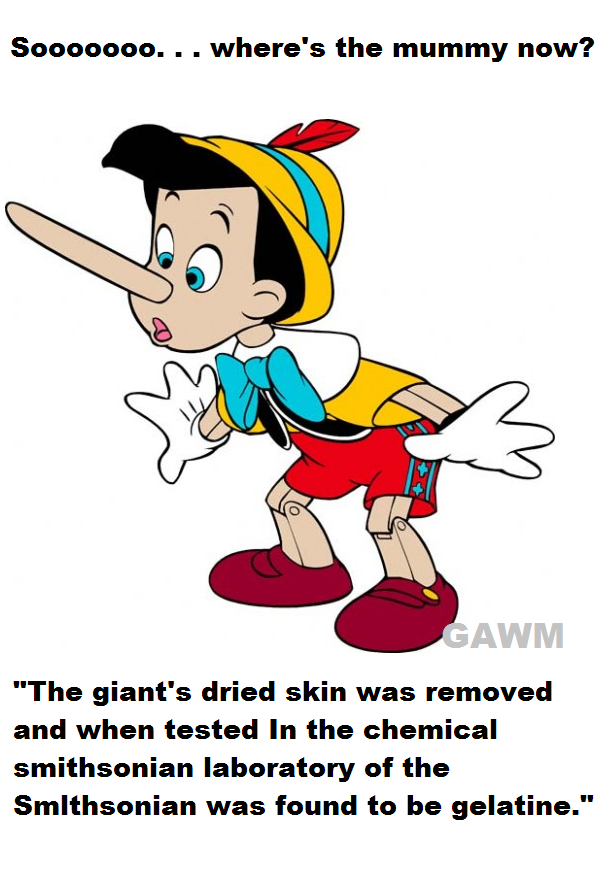 who was perfectly Innocent of the fraud, Is shown on Its right. The “Cardiff Giant,”
New York Statu was in commotion in

tho autumn or ‘C9 over tho discovory of
a petrified giant. lOi feet tall, upon the
farm of ono Newell, near Cardiff, Onondaga couyty. Newell stated that he uncovered the monster while digging a well. A tent was promptly placed over the
pit and an admission fee charged. People
swarmed about tho scene and fought for admission to the lent, within which they saw lying llvo feet below the surface
an enormous ilgure with massivo
features, its llrnbs contracted as if In

agony. Its color indicated that it had
laid long In tho earth and ovor Its surface
were miniature punctures, “like pores. The appearance of great age was further given by grooves on tho under side, apparently worn by water, which trickled along tho rock upon which the giant lay.
A spirit of rovcrence onwrapped visitors onco they were inside the tent. They hardly spoko above a whisper. The good country people found corroboration of tho Biblical text. “There were giants In those days.” Tho admission fees soon netted Newell $150,000 and a JoJnt-stev- k company was formed to exhibit tho giant about the country. Among the leading spirits In this enterprise was tho original of Westcott’s character, “David Ilarum,” “Colonel” Wood, an eminent showman was engaged to exploit the “Cardiff Giant.” as it was called and It was exhibited
In New York City and in othor centers. Barniim tried to purchase It
and finally had a copy made which ho exhibited as the “Cardiff Giant.” Prof. .Joseph Hall, the Stale geologist, examined tho original and gave a favorablo opinion) but Professor Marsh of Yale pronounced ll a fake. The more skeptical people of the neighborhood watched Ncwell’s movements and he was detected in sending considerable sums to one Hull, his
hrothcr-ln-la- w In the West. At length’ Hull confessed that, he got his Inspiration of the fraud while listening lo a revivalist who insisted that “there were giants in those days ” A huge picco of gvpsum was found by Hull near Fort Dodge. Iowa. This he had transported to Chicago,
whero a German stone carver wrought the giant. Its pores being mado with .1 leaden’ mallet faced with steel needles. After being stained with an aging preparation the giant wns transported to a town In New York State, where Hull hauled It lo Newell’s farm at CardlV by team.
Newell sent his family on a trip covering lhe time of the giant’s arrival and burial. Hull, who was a religious skeptic, was uudaunled by tho exposure and felt that he had gotten even with tho revivalist who preached the giant doctrine. Even after Ids confession, the Ren.
Alexander McWhorter and Professor White, both of Yale, continued to believe in the giant’s antiquity, the former announcing that it was a Pheniclan Idol upon which he had found an Important Inscription. Ono of thoso who from the first, branded tho giant as a hoax was Andrew D. While, president of Cornell.

Now it seems to me that you have a choice to follow a conspiracy mentality,

1) by selecting to believe the Smithsonian and the governments do NOT have our best interests.

2) The other option is even a “bigger conspiracist” that ALL of these giants from around the world that are now missing. . . were all hoaxes and forgeries masterfully done by the public from every nation are decietful, and that history is bad, and is written all by incompetence and history needs to be approved by people now who did not OBSERVE IT. Remember, Science is based on observation and testing not evidence seizure and destruction. ~Chris Lesley

There is something that strikes me! That is the microcephalus comparison of the  head in comparison to the great size of the body. It is what i always expect!

Also! This head is obviously Neanderthal, . . . . How many Neanderthal skulls are this same size or larger but they are missing the 8 foot plus body. . . think about it!