The Rock, named after a Somoan Giant 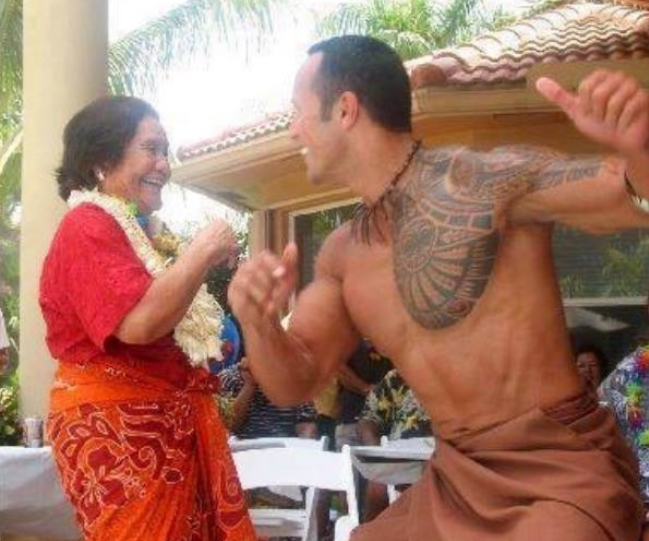 “In Samoan culture we have a very special dance called the “Taualuga” where the woman dances and she’s honored by the men who dance around her out of love and great respect. On my grandmother’s 80th birthday she danced her Taualuga while I proudly danced around her while she laughed and beamed with pride. She had the greatest 80th birthday and her smile was from ear to ear. My grandmother, Lia Maivia was a strong willed, highly respected and tough pioneer in the world of pro wrestling, becoming wrestling’s first successful female promoter. But when we hit hard times and were evicted from our apartment, shortly after that my grandmother became homeless. When I finally could afford it, I bought her a place of her very own that she LOVED. I would always ask her after that, “Grandma are you happy?”.To which she’d call me by my Samoan name and say, “Tuife’ai Im so happy.. thank you.. oh and can you please sing that song I like..” Ha! I’d start singin’ away (off key of course) and she’d laugh and smile from ear to ear. A few months after this picture was taken, my grandma passed away peacefully in her sleep. I know we all experience loss and it’s so tough to deal with… but for the rest of my life I’ll be grateful for the one of a kind lessons only our grandparents can teach us. Miss you grandma and I hope you hear me cause I’m still quietly singin’ away to you (off key of course:)… Misiga tele ‘oe Grandma, alofa tele atu mo ‘oe. From Wilhelmina Matuu, to Dwayne The Rock Johnson your Samoan name does suits you perfectly.  “Tuifeai” was the name of the strong fierce looking giant that lived in Samoa in the old days and the way you act in any movie does reveals the legacy of that Samoan giant. His name was Tui but just because he eats people he was then called “Tuifea’i because of his fierceness. Thanks for sharing your beautiful story of your grandmother. She is still watching you from heaven. From a Facebook post on Dwayne Johnson’s page.” Somoan Giant https://www.facebook.com/DwayneJohnson/timeline

Big Fan, I never like to play fan-boy to anyone, but me and my wife watch a lot of Dwayne Johnson’s movies. She came home with Rundown from Redbox i had seen it several times, she hadn’t. I have no problem watching it again, and i am sure its not the last time. I like these little connections between people and these Legends-of-truth. Giants are a big part of history, and should be recognized as such. Its nice to know that Dwayne Johnson was named after a real giant, it does put things into perspective.