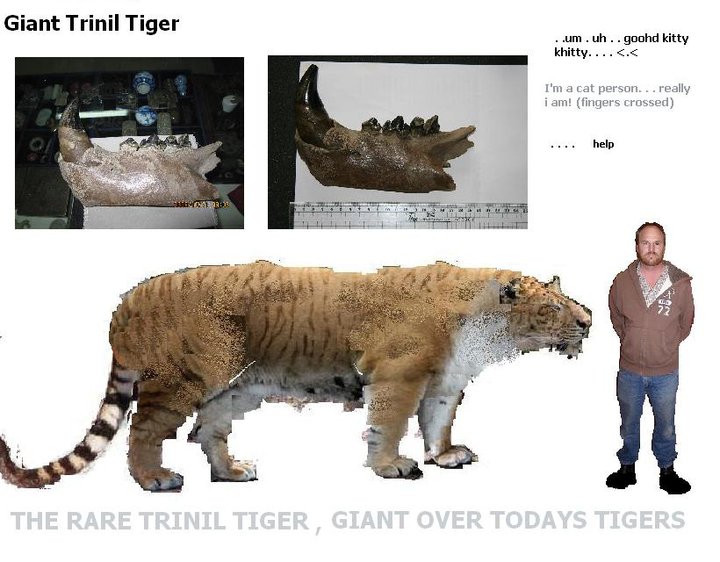 Tigers of Pleistocene were larger then amur & bengal tigers.

Approximate skull length of the species is around 42 cm.

This is easily the most obscure cat of the large cats, being known from fragmentary remains little information is revealed about the largest of cats.

I should mention that the “Pleistocene tiger” is not a separate species, but rather the “early version” of the same tigers we see today.

Tigers are the largest felines nowadays, with large Bengal and Siberian males reaching up to 300 kgs (661lbs) or more.

“However, during the Pleistocene, the food supply was greater, and so the tigers themselves were bigger.”

(Wrong! Its genetics were the reason for the Greater Ancestors of tigers to be so large.)

(You can increase the food supply today and you will just get a fat tiger not a greater tiger.)

Some fragmentary remains (including massive jaws and fangs) have been found in Russia, China and Java, suggesting that these

being worthy contenders for the title of largest cat ever. (low estimates!)

A subspecies called the Trinil tiger (Panthera tigris trinilensis) . . . .and is known  from fossils found at Trinil in Java.[

I would bet on the Giant Trinil Tiger. From the largest cat ever posts, the two individuals were reckoned to be 420 and 470kg respectively. (again low estimates)

Bear in mind that when random fossils are found, there is only a slight chance that the fossils could belong to

or an extraordinary, fully matured male.

However, the chances that a random fossil belonging to a female or non fully grown tiger is very high. (brilliant statement!)

there are quite a few giant fossils already found of the Siberian Tiger from the past. all of them were huge,

just as many as the Trinil Tiger.

The size of these fossils are huge and i cant imagine, from what Grizz mentioned: that it was from sub-adult, so far it had to belong to a full grown specimen and there were others. Prehistoric Siberian Tiger is vying for the top spot of the feline world.

“this is a picture of the famous Ngandong/Trinil Tiger which could be the largest natural cat that ever existed.   the Siberian Tiger,  whose teeth were presented by GrizzlyClaw also grew to this size. ‘

This information was taken from a blog in which the Cave Lion . . . (a greater ancestor to lions) was compared to the Plestocene Tiger. Or Trinil Tiger.

It was a good speculation that even though the jaw fragments were huge, it is most likely that they were from sub-adults, or Tigers not fully matured. Which means that the fully adult Trinil Tiger would have been much larger.