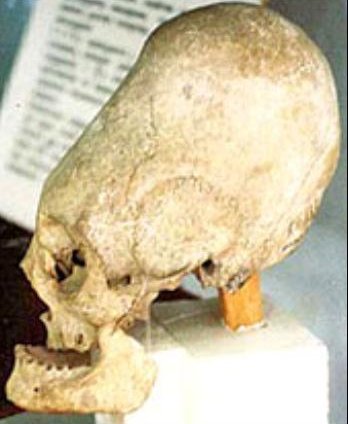 Russian media outlets have recently covered a story about yet another mystery of the ancient period of human civilization, when archaeologists discovered plates with drawings in South America. The plates or the so-called Iki stones are about 70 million years old. The drawings show people with disproportionately large heads. There are skulls of the same shape in the local museums. But archeologists find the elongated skulls in Russia too, in the North Caucasus. The Pyatigorsk museum of regional studies has them on display. Do those skulls have anything in common? And who started “the fashion?”

A hole in the crown of the head

“The Pyatigorsk skull was found at the excavation site of the Khasaot burial ground in the vicinity of Kislovodsk,” says Doctor of Historical Sciences Vladimir Kuznetsov, the author of numerous studies of history of the North Caucasus. “The skull is part of culture of the ancient Alani. Approximately, it dates back to the 3rd – 5th centuries A.D. These strange skulls appeared at the same time when the Sarmatian and Alani hordes came around. Some of the nomads moved for the North Caucasus in 15th century.”

“Researchers have repeatedly proved that the skulls had been deformed on purpose,” says Mr. Kuznetsov. “Ropes or special blocks were tied tightly round the heads of infants, over the temples. The custom went out of fashion by 17th century. The reason behind the deformation phenomenon is still unknown. It is hard to say whether the methods worked effectively or not since nobody ever conducted scientific experiments regarding the binding of the infants’ heads.