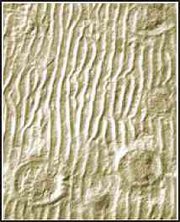 A flotilla of giant jellyfish marooned on a beach. . . has been unearthed in what is now central Wisconsin.

This is the largest-ever find of the biggest-ever fossil jellyfish,

making this an almost impossible find, so I’m betting they’re really the ghosts of the bottom of beer cans that were siting there.

It is Wisconsin, after all. Since jellyfish are blobs with no bones or scales, they fossilize poorly. No “parts”, to be technical. Waves, sand and sun destroy their bodies before they can be covered in sediment.

“It’s rare to find a single jellyfish fossil; to find a lot of them is almost unheard of,” says James Hagadorn of the California Institute of Technology in Pasadena, who found the thousands of “hulking huge” jellyfish.

Schools of the critters – up to 27.5″ (70 cm) long – were somehow stranded and buried, probably trapped in a shallow tidal lagoon. Bacteria in the sediments would have consumed the gelatinous flesh, replacing it with minerals. That’s one big d— hocker.