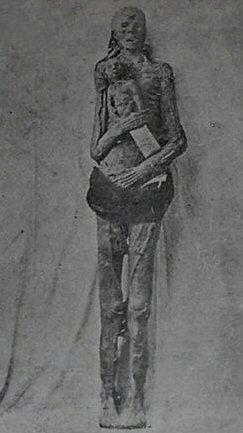 The Martindale Mummies  were discovered 1n 1885 . In California’s great Yosemite Valley . A group of miners led by G.F. Martindale found the remains of a woman nearly seven feet tall still holding a mummified child in a cave behind a wall of rock . These mummies are currently the property of Ripley’s Museum .

The people Indigenous to the Yosemite region when whites arrived were the Ahwahneechee tribe. Ahwahneechee folklore relates a story of giants called Oo-el-en who came into the Yosemite Valley many years before the white man. The Oo-el-en, like the sitecah of nearby Nevada, were cannibalistic giants who ate the meat of the Indians. Oo-el-en would catch the adults and cut them into bite-size pieces, hanging their meat in the sun to dry into jerky.   The legend says that the Ahwahneechees finally killed the giants and burned their bodies  [The last of the Ahwahneechee died in the 1940s]

The Martindale Mummies (left) were acquired by Ripley’s in February 1998 from Dr. Larry Cartmell. The mother and child mummies were discovered in Yosemite Valley, California in 1891 and first displayed in Scranton, Kansas in 1899. The origin of the “Martindale Mummies” remains a mystery. Measuring an incredible 6’8″ tall, the mother is the tallest female mummy ever discovered!