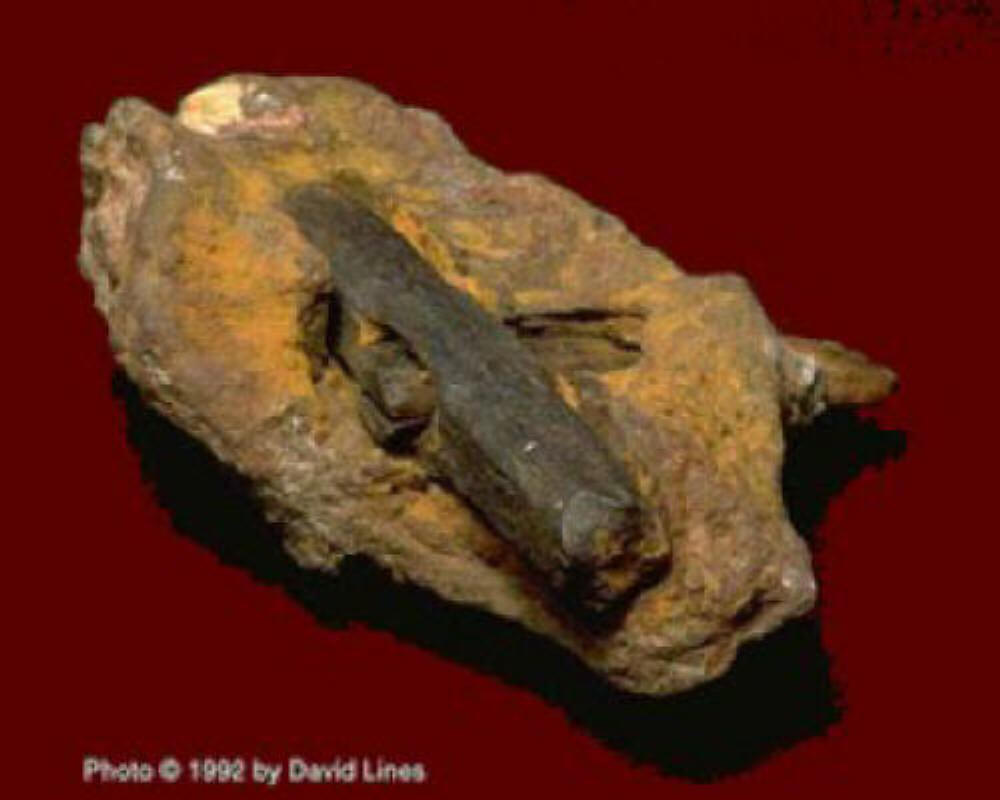 This is a hammer made from an alloy of iron which is very modern in technology.

“This ancient tool has a simple form, similar to the type of hammer that is still common in Germany today. The handle now is a very hard petrified crystal with an intact structure. It was possible to ascertain that the interior of the handle had partly turned into porous coal.

There is no way to scientifically explain this combination of carbonization and petrification. I have not heard of a similar piece, found anywhere in the world.

Two very different processes must have occurred simultaneously or in short succession.

Wood petrifies when it is buried in silt deposited by flooding rivers or seas and silicates, such as are found in volcanic ash, dissolve and impregnate it. These substances replace the hydrogen and oxygen portions in the wood and begin the petrifaction process by silicification. This may produce very solid opal or quartz minerals. The final product is approximately 5 times as heavy as common pine wood.

This short description of the hammer handle should make it obvious that the fossil hammer must be authentic and very ancient. In spite of all our modern technical abilities, it has never been possible to produce petrified wood with porous coal inside.

It therefore is out of the question that such a hammer could be a hoax. I must clearly emphasize this point, as most artifacts which contradict the accepted view of the world we are accustomed to, are accused of being forgeries.

Our traditional schools of thought, however, are at a loss to explain this hammer.

Petrified wood, and therefore this ancient tool, is supposed to be at least 140 million years old. Official scientific authorities, however,

say that humans capable of manufacturing high quality tools have only existed for a few recent millenia. Something concerning these datings and the enormous time intervals of the geological era must be erroneous.

Examination of the hammer.

Before I look into these questions, I would like to give a more detailed description of the hammerhead’s characteristics in order to make the full extent of the mystery clear.

Detailed research was carried out independently of one another by two different institutes. John Mackay, Director of Australia’s “Creation Science Foundation”, analyzed the hammer thoroughly during his visit to the United States.

A number of Australian metallurgists, as well as those working at the respected metallurgic Institute “Batelle Memorial Laboratory” in Columbus, Ohio (USA), took part in these analyses.

Sophisticated electron microscopes served to examine the structure and composition of the steel the hammerhead was made of.

The results of the examinations were as mysterious as they were bewildering.

Other additives or impurities were not detectable.

Non-destructive testing methods of steel quality comprise x-ray examination, magnetic testing as well as ultrasonic detection. X-rays showed no evidence of inclusions or irregularities in the hammerhead steel. This means, it was tempered and hardened in some way.

In general, chemically genuine and unworked steel is rather soft. The even structure determined, however, suggests that this hard steel that was manufactured by some sophisticated technology. The results of the examination are as sensational as they are unbelievable. Anyone with the slightest knowledge of steel manufacturing knows that every modern steel-making process, inevitably leads to carbon or silicon impurities! I emphasize the word inevitably. Steel production without these impurities is simply unthinkable!

No other known ingredients used for refinement such as copper, titanium, manganese, cobalt, or molybdenum, vanadium, wolfram or nickel could be traced.

We employ these and other elements in steel manufacturing to achieve different properties needed for different fields of application.

The high quantity of the chlorine in the fossil hammerhead is remarkable, as well. Chlorine plays no part in modern steel manufacturing. It is not used at all today, so it is impossible to produce the high steel quality of the type found here by today’s manufacturing methods.

Much the same has been shown concerning the hammer handle. Two forgery-proof materials for which we have no scientific explanation, combined in one tool.

My explanation, however, is not in accordance with traditional scientific theory. The fossil hammer shows still more peculiar features. In breaking open the hammer’s original stone enclosure in 1934, the upper edge of the metal head was damaged, leaving a small notch. The inside of the notch revealed a shiny silvery surface.

Until today, more than 60 years later, the color of the notch has not changed. No traces of rust are perceptible. The relatively high concentration of chlorine combined with a total absence of carbon, which would cause corrosion by reacting with oxygen, may be responsible for this phenomenon….” Hans Zillner from his book: Darwin’s Mistak.

Apart from the people so easily duped in the “Orson Wells Broadcast crowd” THE BEST SOLUTION is:  people in the past had a higher, more advanced civilization than we do today. Their metallurgy exceeds ours, we are devolving as a society and technology is continually lost. The human brain shrinking from then til now is a testimony to our inability of understanding ancient cultures. There is truly NO new thing under the Sun.