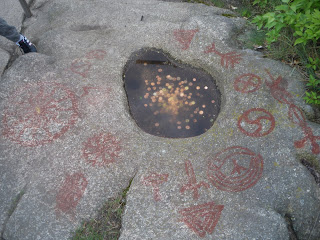 From author: “We continued along the trail and passed by the legendary horse hoof print:
According to legend, a giant named Bodo wanted to marry a princess named Brunhilde.  She wasn’t such a fan of this idea, so she ran away on her horse.  When they came up to a huge ravine, they had to jump – and left behind a giant hoof print.”
The oral tradition is recognized around the world, it is a fact that native stories have more foundations in reality, than most of the modern reinterpretations of history. Evolutionary history denies history and evidence when at all possible, but the hard evidences no matter how slight, carries greater weight than academic testimonials.
It is entirely possible that this was a hoof print of the giant horse Equus Giganteus.
Chris L Lesley GAWM
Location: in the “mountains” of Northern Germany.  The Harz forest
http://sandyaroundtheworld.blogspot.com/2010_05_01_archive.html