The largest snake is not today’s Anaconda 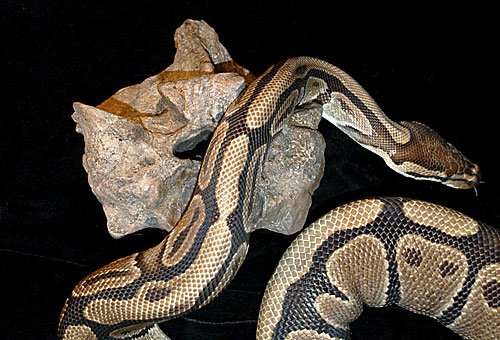 In this picture is also the vertabrae of its “greater ancestor”. In this picture is one of the largest snakes that ever existed. It is in the past, in the fossil record. In devolutionary theory animals start with “peak-optimum-efficiency” an then they degenerate. Biological systems mimic technology degeneration. Every animal has a greater ancestor, and this is a far crying-monkey from the evolutionists model of “the cone of increasing diversification”.

which supplanted the previous record holder, :…..

By comparing the sizes and shapes of its fossilized vertebrae to those of extant snakes, researchers estimated that the T. cerrejonensis reached a maximum length of . .. . . (MORE THAN 50 FEET),weighed (MORE THAN) (2,500 lb), and measured about 1 m (3 ft) in diameter at the thickest part of the body.

These measurements are based on a macrocephalus construction, and without cartilage spacing, and with a reduced number instead of a full vertabrae count. so estimates may be far short

“In 2009, the fossils of 28 individual T. cerrejonensis were announced to have been found from the Cerrejón Formation in the coal mines of Cerrejón in La Guajira, Colombia. Prior to this discovery, few fossils of Paleocene-epoch vertebrates had been found in ancient tropical environments of South America. The snake was discovered on an expedition by a team of international scientists led by Jonathan Bloch, a University of Florida vertebrate paleontologist, and Carlos Jaramillo, a paleobotanist from the Smithsonian Tropical Research Institute in Panama.

Because snakes are ectothermic, the discovery implies that the tropics, the creature’s habitat,

must have been warmer than previously thought, (heat and cold are not contributors to giant size)

averaging approximately 30 °C (90 °F). The warmer climate of the Earth during the time of T. cerrejonensis allowed cold-blooded snakes to attain much larger sizes than modern snakes. Today, larger ectothermic animals are found in the tropics, where it is hottest, and smaller ones are found further from the equator.