In South Africa, a giant footprint of a woman measuring over 4 feet long . . .(has been reported) Pointing to the probability of this being a female human-like species’ foot, proportionally the two-legged being would need to be some 30 feet tall! The local African people commonly refer to this as a highly revered and sacred site. Human Footprint 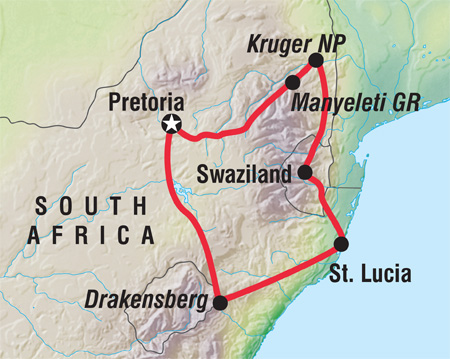 Did giants exist on earth? This interesting rock formation may suggest so. Goliath’s Footprint, as the locals dubbed it, is one of South Africa’s little-known secrets. Nestled in the forests near the Swaziland border of South Africa, this print is definitely not a tourist hot-spot. One may speculate that erosion caused the interesting shape of this upright rock formation, but it features exactly five “toenails,” and it looks like the earth has been pushed away around the big toe. If I encountered this photo on the internet, I might have attributed it to Photoshop techniques and have had some doubts about its existence, but I have been to the spot, and felt the grooves with my own fingers. It is very real. If this mystery of nature was indeed made by a giant human, I don’t think I would have wanted to encounter him! Locals in the area are all mystified by the footprint. South African folklore does contain mentions of giants, but up to date I haven’t heard any stories about the origin of this giant footprint. Some say that there are similar rock formations in India and in Australia, but an internet search has not given me any results.