Russian Ethnologists Discover Bones of a Prehistoric People.
Port Townsend, Wash., Aug. 21. —News is brought by the United States revenue cutter Tahoma, which reached Puget Sound to-day. after steaming around the world from Baltimore. that a party of ethnologists, headed by It. Waldemer Yochelson. a noted Russian explorer, encountered at the island of Attu. In the Aleutian Archipelago, has discovered relics and skeletons indicating a prehistoric population of Northwestern North America. Aleutians 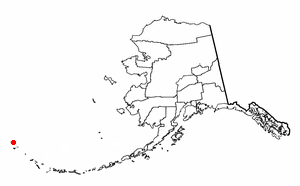 In a statement to Captain Queenan, of the Tahoma, Dr. Yochelson told of differences from the present civilization on the islands indicated by the relics, warranting a belief that thousands of years ago the highest type of humanity lin the New World existed in the north. The search of the Yochelson party is directed by the Royal Russia Geographical Society, and will be continued several years before a formal report is made in St. Petersburg.

The report is also brought that the Bogostov Islands. In Bering Sea, the field of numerous changes through volcanic eruptions, are now undergoing further marked configurations.

Numerous reports from the Aleutian Islands indicate that these islands were populated by giants of old. The prehistoric people were far from primitive and more mature than modern man. It is consistent that islands were the last habitat of giants large skeletons were found on nearly every known island in the world. This is an area where evolutionist story-telling could come in to play and giantologists and believers in transmutational pantheism (evolutionists) could agree that these giants existed on many islands.It poses no threat to their storytelling scenarios, . . . except for all the examples of them living on the mainland.