The Giant Face of BODO 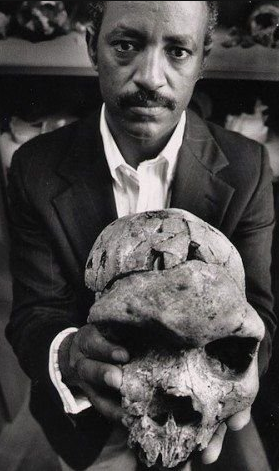 Paleontologist Berhane Asfaw displaying the immense Bodo cranium, with one of the largest faces in the fossil record. This gigantic skull is the largest known in human history. While only a partial cranium, the find of Bodo, in East Africa possesses the largest face of any hominin yet recorded.

(Its face is the largest among all fossil hominids.)

The Bodo cranium is a fossil that was found by members of an expedition led by Jon Kalb in 1976 at Bodo D’ar, Awash River valley of Ethiopia. The initial discovery was by Alemayhew Asfaw and Charles Smart, a lower face. Two weeks later, Paul Whitehead and Craig Wood found the upper portion of the face. The skull is classified as Homo heidelbergensis (Homo rhodesiensis). The cranium has an unusual appearance, which has led to debates over its taxonomy.