The Giant Cheetah, a Faster Cheetah. 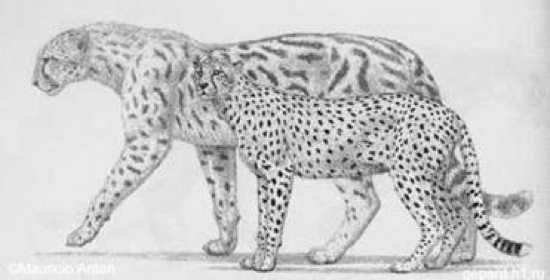 At around 120-150 kgs (265-331lbs), it was as large as an African lioness, and was able to take on larger prey than its delicate modern day counterpart.

The Giant Cheetah was also adapted to fast running, . . .

“Some, have suggested that the Giant Cheetah, having longer legs and bigger heart and lungs, was probably able to run as fast, or even faster, than the cheetah does today – that’s over 115 kph (72mph)!

The Giant Cheetah lived in Europe and Asia (from Germany and France to India and China) . . . .

Due to its living in colder environments than modern day Cheetahs, it is possible that the Giant Cheetah had longer fur and perhaps a lighter coloration.”

Bigger better faster stronger and smarter is the recipe for greater-ancestry. People have not made the comparisons or have been made aware of this model. Although independent researchers write about instances of greater-ancestry, this as an all-encompassing theory can only be verified here on this website.