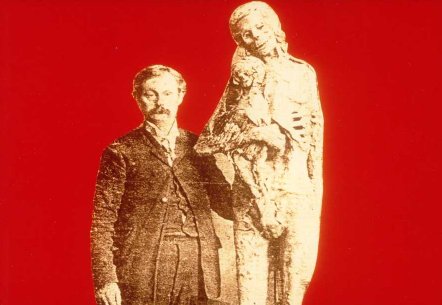 In 1885, miners discovered the mummified remains of woman measuring 6 feet 8 inches tall holding an infant. The mummies were found in a cave behind a wall of rock in the Yosemite Valley. This mummy is now in Ripley’s believe it or not Orlando Museum. Bridlevale Falls

The Martindale Mummies seen here were acquired by Ripley’s in February 1998 from Dr. Larry Cartmell. The mother and child mummies were discovered in Yosemite Valley, California in 1891 and first displayed in Scranton, Kansas in 1899. The origin of the “Martindale Mummies” remains a mystery. Measuring an incredible 6’8″ tall, the mother is the tallest female mummy ever discovered! Believe It or Not! http://www.ripleysorlando.com/artifact/mummy.htm

If you take a look at the two pictures of the mummies which are supposed to represent two different stories, they look like the same mummy. Perhaps the Yosemite story was the true and accurate account, and the Bridlevale account was a possibly an error or fabrication.

whatever the case, The conclusion is that the physical remains do exist.