A Bavarian catacomb located in a cave on the German/Swiss border containing thousands of normal, and not so normal, giant, human bones.   The normal size bones are found burned and brittle in a massive mound of bones, wood, and ash. The giant bones are buried, or arranged in a ritualistic manner. Breitenwinner

Is this a massive burial cave for an ancient race of giants? Here, are two graphics taken during an expedition Wilfried Lorenz and another
explorer made into Breitenwinner Cave in 1976, after reading documentation
of a 1535 exploration by Berthold Buchner and local residents of Amberg. Breitenwinner
(Wilfried Lorenz is the individual in left-hand graphic.)

He describes very little, except the removal of bones and how he found the cave.
“The current condition of the Breitenwinner cave is the picture of a total, senseless destruction.”

The cover page from Buchner’s report on his 1535
exploration of Breitenwinner Cave.

In this account Buchner speaks of giant human bones, huge skulls, statues, and ghosts in the cave.

Remarkable Tidings from the day of St. Peter and St. Paul in the year 35! Twenty-five citizens of the town of Amberg set off to a mountainous area three miles distant from Amberg. Near the village of Predenwind they went into a huge hollow mountain, about 900 Klafter [1700 m] deep, and walked through to the other side. The marvels they saw there have been written down by Berthold Buchner. The ignorant will not believe this story, the experienced ones will not think it possible. But we have seen it with our own eyes, and it is the truth. – 1535

In the evening on the day of St. Peter and St. Paul the abovementioned 25 men set off from Amberg with a cart with ladders, materials for making fire, stone-breaking tools, ropes, wine, bread, and other items useful for such an undertaking. They went to the market place of Hohenburg and stayed overnight. Next day they started very early and at 5 am they met at the entrance of the huge mountain, and debated. Two of us were appointed leaders to whom we others promised obedience, etc. Then we got ready to go into the hole which is so wide that one could turn a wagon of hay in it. Each of us had to carry something: a piece of rope, a light, lantems, pickaxe, wine, bread, etc. And we sang cheerfully ‘We are travelling in the name of God!’

One of the leaders went in first, the other leader brought up the rear. He secured the entrance with rope and marked it with signs to avert danger, because if we should lose track of the ropes it would have been impossible for us to get out again. After fastening the ropes to a rock we descended 500 Klafter [950 m] deep. Four honest strong men were selected to keep watch at the mouth of the mountain cave. Very soon we arrived at a very narrow cleft. One of our companions, a goldsmith, who at home had desired to be the first one in the cave, was so frightened by the sight of it that he deserted us notwithstanding his promise. But we crept on our stomachs some fifty Klafter [95 m] through this narrow cleft. There was a wider opening next to it but it did not stretch very far. First of all we came upon a wide space like a hall for dancing. When we crept in we found so many bones that the first of us had to pile them up in one place to make room for us to enter. The bones were very large as if from giants.

We then reached a very narrow hole and had to squeeze through on our stomachs. At 200 Klafter [380 m] one comes into what seems like a beautiful spacious palace big enough to hold about 100 horses. It is lined at the top very handsomely with ‘grown’ stones [speleothems]. There are eight or ten ‘grown’ pillars and good seats at the sides. Here we found two skulls which to our surprise were enclosed by the rock, we could hardly hack them out with our tools. Each person took a piece, one the cranium, one the teeth, etc. There were many passages here and everywhere in the mountain; some of them we explored. All the caves and passages were full of big bones. We searched for about an hour for a hole leading further in. At last our leader found one and we all followed him. The other tunnels met now and then in the mountain. We were still amazed by the sight of this palace.

After 150 Klafters [285 m] we came across a very narrow cave and we had difficulty in squeezing in. There we heard a strange roaring, crackling and rustling, and more than one of us wished he had stayed at home with his wife. Suddenly the cave widened so that we could walk side by side. We took counsel and decided to go on and find oat what these wild sounds were. Our leader went in front again, we following. We arrived at another wide space which we examined carefully. It looked like a chapterhouse, with pews on one wall and a gallery overhead. It was difficult to get up there and I stayed down below. In all the caves we found many bones. We came to a narrow vault where we found a skull bigger than we had ever seen before. When we tried to squeeze it through the narrow opening it crumbled like ashes. Through a narrow entrance we got down further, about 200 Klafter [380 m] . There was more and more roaring and rustling till we came upon a fairly wide opening where an enormous waterfall was rushing down between two rocks with such a force it would have been sufficient to turn two mill wheels. The stream ran downwards over the opening. we were curious to know where this stream came from or find its spring, as it was so icy cold, but we could not follow it. Our leader got stuck there in a cave; he had to be pulled out otherwise he would have died. The same happened to me, and I felt very weak afterwards and the apothecary gave me a restorative.  Adjoining this wide cave was a handsome triangular vault. There we found a stone sculpture. It resembled a deity seated on a throne with a straw wreath on its head. The straw was black and very brittle. I and some others took some straw home.  We found another stone sculpture hanging from a high wall. We left a light bunting in front of it. At 200 Klafter [380 m] we found loose soil with a great many bones. We crept and walked on following the rope, and at 250 Klafter [475 m] we came to a most wonderful palace and tabernacle. On the other side, between the south and west point, we found a fountain with four stone ,pillars round it, and there seem to have been seats there at one time. The fountain was very cold. We hung our winebottles in it and the wine was soon cooled. While we refreshed ourselves at the fountain we heard a loud noise in the cliff where the stream ends. Our leader was bold enough to climb in but got stuck and became drenched. When we came to his rescue with fights, one of us, called Burckstaller, was struck on the head, it could have damaged one eye. We thought a female figure had been the thrower. Burckstaller was very superstitious, so perhaps it was a ghost. We did not see anything else.

It was very strange that the dripping water, which falls into this mountain in 60 places, freezes into a very hard even rock and into translucid stone. From some caves white salt-like stuff trickles out, it looks like glass and we took it to be saltpetre. In a cliff of the rock one of our companions found a strong grey curly hair which he assumed was from a beard. All of us were curious to fred out more about the ‘ghost’ and would have faced further adventures and dangers. But we lost the passages and caves where we saw the’ ghost’ and were forced to climb to the surface with the rope and soon reached daylight again. Just then a cuirasslet with two horses passed the entrance of the cave and we called to him to come in. But on seeing us he rode away hurriedly. We all looked discoloured and were terrified at each other’ s appearance. We looked like corpses and startled the guards at the entrance.

But thanks to God, nobody was hurt. Praise be to God now and for ever. Amen. This has been written down by Berthold Buchner, who took part, and is attested by the Treasurer of Areberg. 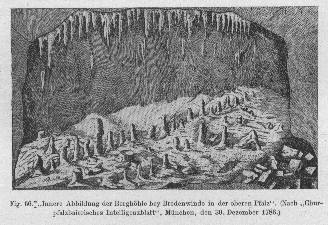 The only other historical graphic of the Breitenwinner Cave from an exploration by M. Flurl in 1792

The mass amounts of human bones in Breitennwinner Cave. 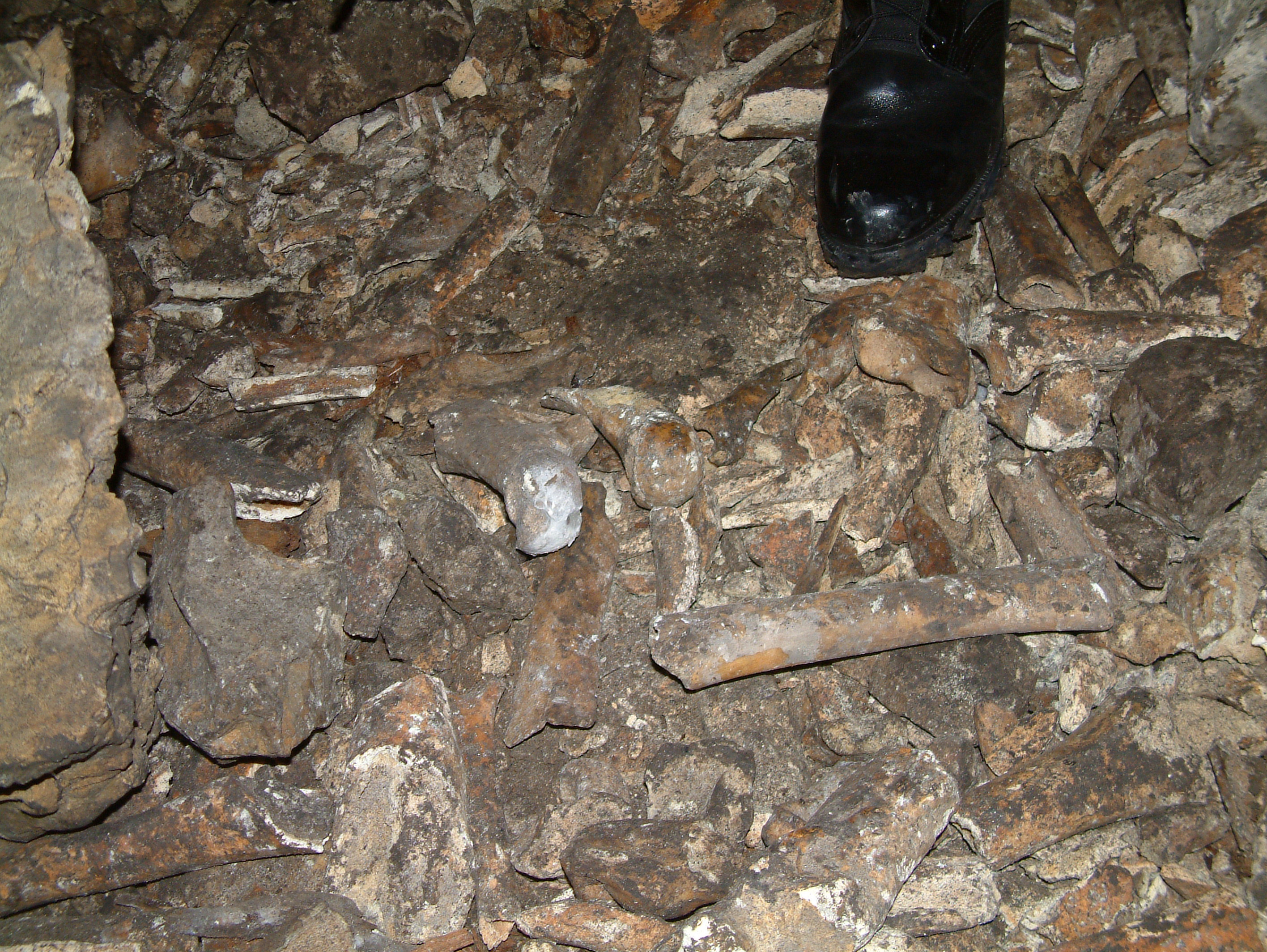 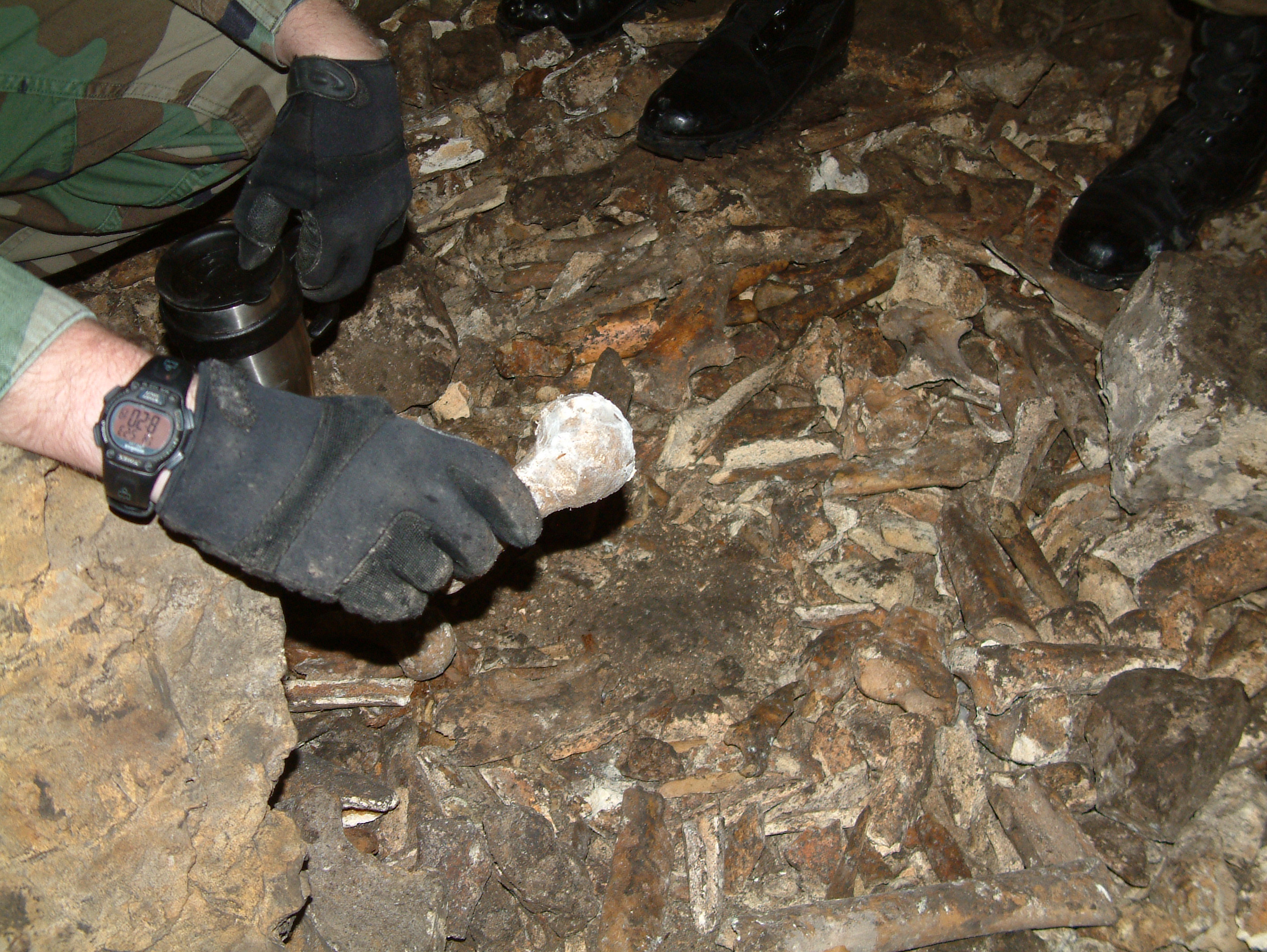 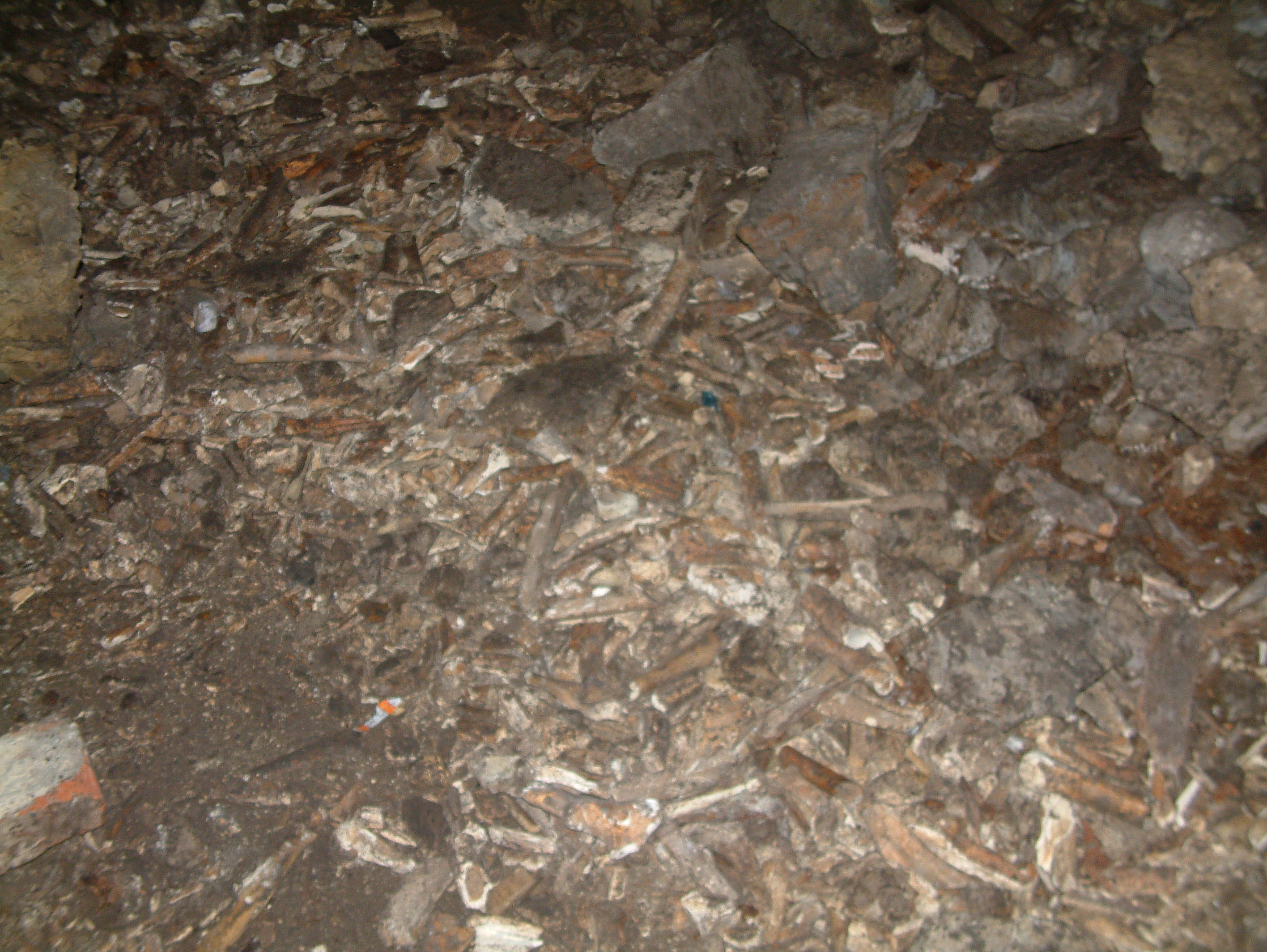 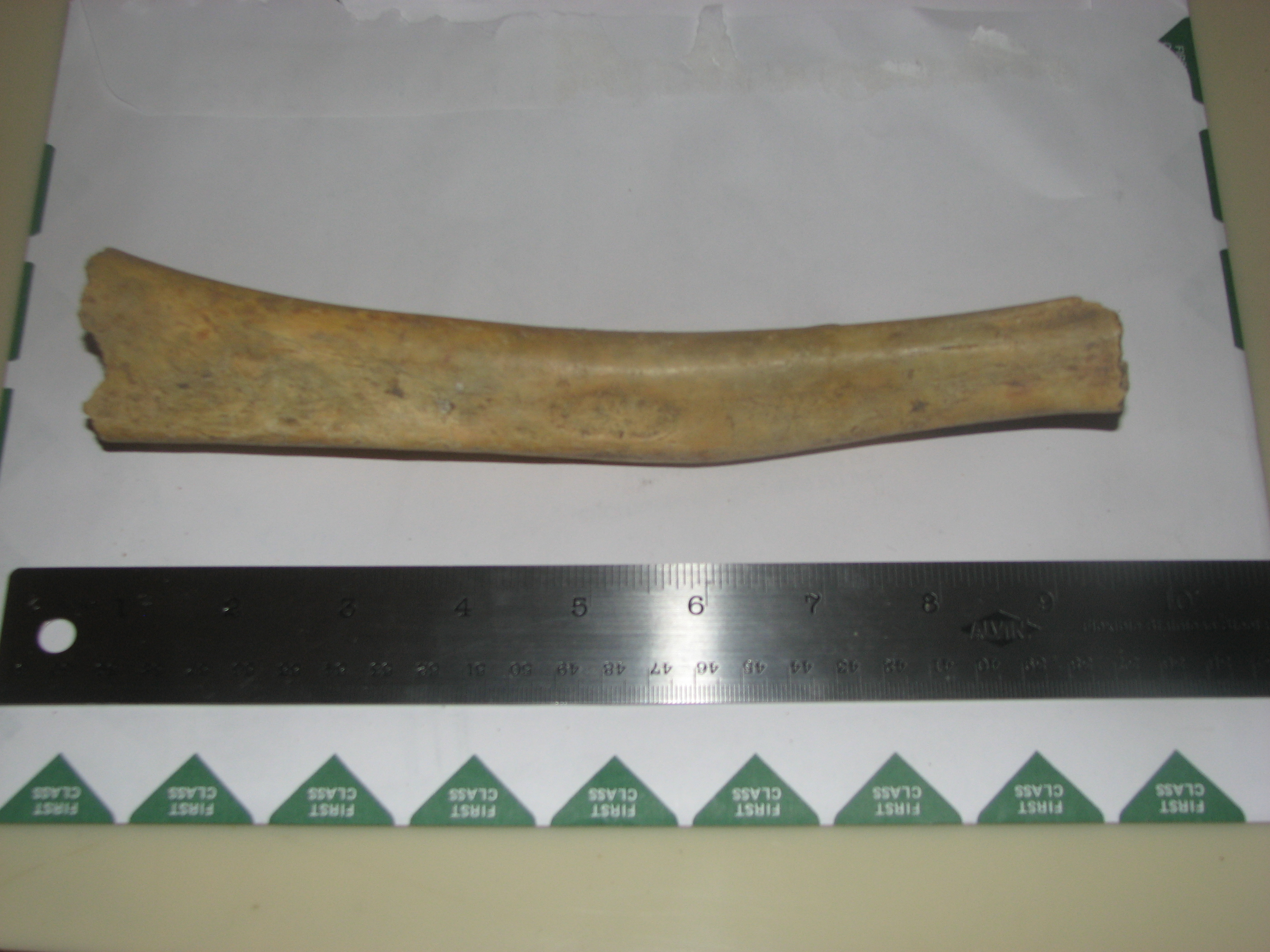 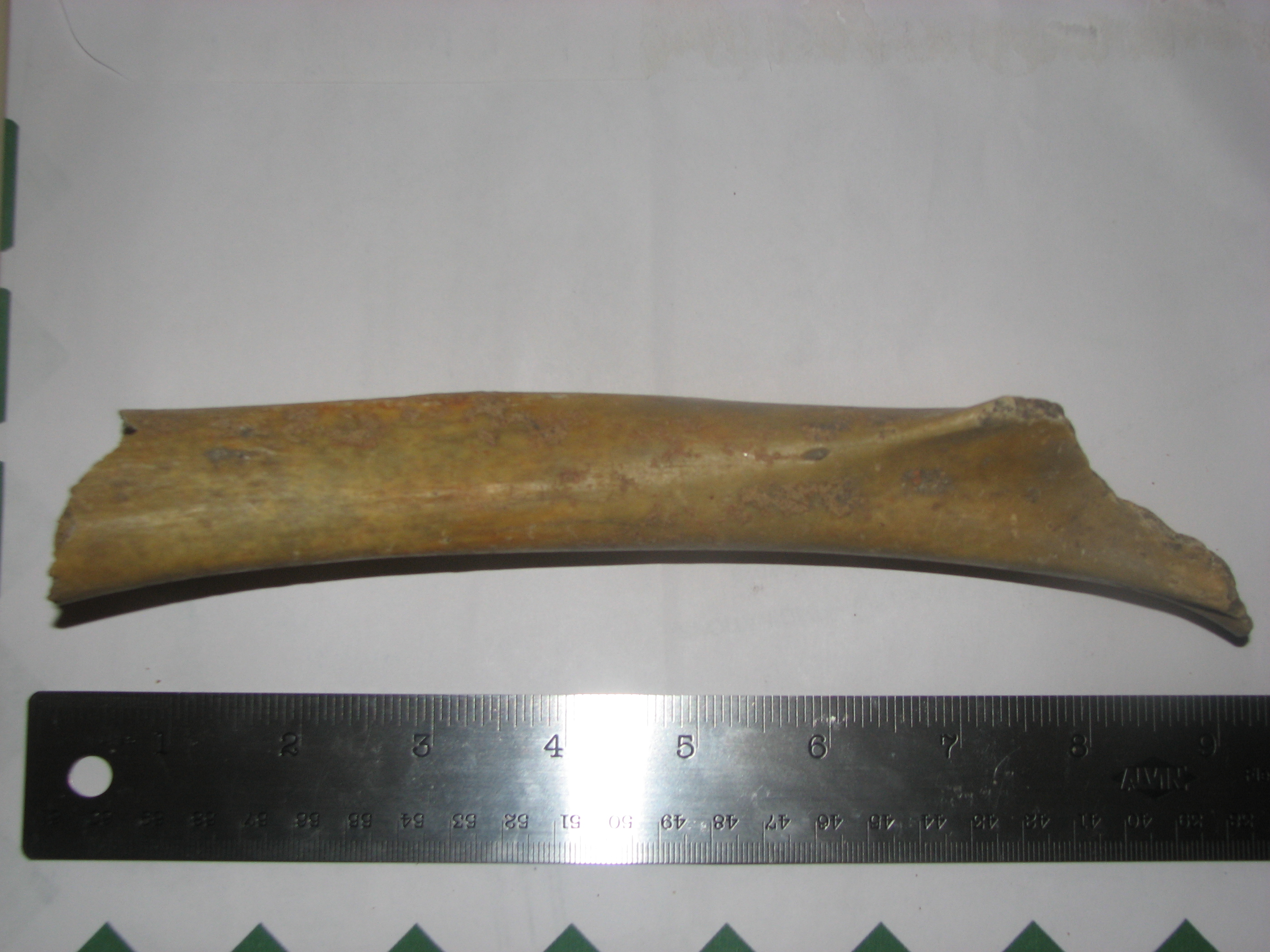 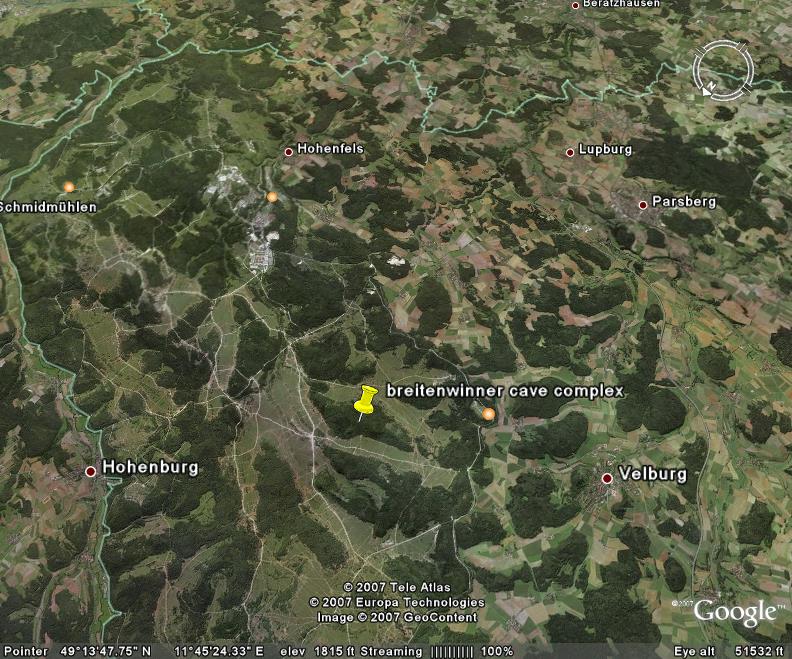