In 1936, workers discovered mysterious small vase. A 6-inch-high pot of bright yellow clay dating back two millennia contained a cylinder of sheet-copper 5 inches by 1.5 inches. The edge of the copper cylinder was soldered with a 60-40 lead-tin alloy comparable to today’s solder. The bottom of the cylinder was capped with a crimped-in copper disk and sealed with bitumen or asphalt. Another insulating layer of asphalt sealed the top and also held in place an iron rod suspended into the center of the copper cylinder. The rod showed evidence of having been corroded with an acidic agent.

The Baghdad Battery, is the common name for a number of artifacts created in Mesopotamia, in the village of Khuyut Rabbou’a, near Baghdad, Iraq.

In 1940, König published a paper speculating that they may have been galvanic cells, perhaps used for electroplating gold onto silver objects.[2] This interpretation continues to be considered as at least a hypothetical possibility. If correct, the artifacts would predate Alessandro Volta’s 1800 invention of the electrochemical cell by more than a millennium. 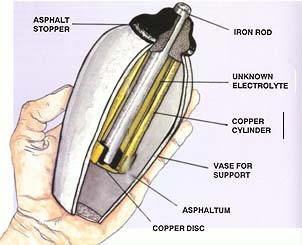 When the vases were lightly tapped, a blue patina or film separated from the surface, which is characteristic of silver electroplated onto copper base. It would appear then that the Parthians inherited their batteries from one of the earliest known civilizations.

In 1940, Willard F.M. Gray, an engineer at the General Electric High Volatage Laboratory in Pittsfield, Massachusetts, using copper sulfate solution, it generated about half a volt of electricity.

This experiment proved that electric batteries were used some 1,800 years before their modern invention by Alessandro Volta in 1799.

It also seems that the use of similar batteries can be safely placed into ancient Egypt, where several objects with traces of electroplated precious metals have been found at different locations. There are several anomalous finds from other regions, which suggests use of electricity on a grander scale.

The Riddle of “Baghdad’s batteries”

I don’t think anyone can say for sure what they were used for, but they may have been batteries because they do work   Dr Marjorie Senechal

The vessel showed signs of corrosion, and early tests revealed that an acidic agent, such as vinegar or wine had been present.

More than 60 years after their discovery, the batteries of Baghdad – as there are perhaps a dozen of them – .

Replicas can produce voltages from 0.8 to nearly two volts.

Making an electric current requires two metals with different electro potentials and an ion carrying solution, known as an electrolyte, to ferry the electrons between them.

The ancient Greeks wrote of the pain killing effect of electric fish when applied to the soles of the feet.

But this tiny voltage would surely have been ineffective against real pain, considering the well-recorded use of other painkillers in the ancient world like cannabis, opium and wine.

This idea is appealing because at its core lies the mother of many inventions: money.

In the making of jewellery, for example, a layer of gold or silver is often applied to enhance its beauty in a process called gilding.

“I have always suspected you would get tricks done in the temple,” says Dr Craddock. “The statue of a god could be wired up and then the priest would ask you questions

It is said that to the uninitiated, science cannot be distinguished from magic.

This is the “Leydon Jar” It is like a cell for a battery.

The idea for the Leyden jar was discovered independently by two parties: German scientist and jurist Ewald Georg von Kleist, and Dutchmen Musschenbroek and Cunaeus.[2] It was in 1744 when von Kleist lined a glass jar with silver foil, and charged the foil with a friction machine. Kleist was convinced that a substantial electric charge could be collected when he received a significant shock from the device. The effects of this “Kleistian jar” were independently discovered around the same time by Dutch scientists Pieter van Musschenbroek and Cunaeus at the University of Leiden. Musschenbroek communicated on it with the French scientific community where it was called the Leyden jar.

Daniel Gralath was the first to combine several jars in parallel into a “battery” to increase the total possible stored charge.[3] The term “battery” was coined by Benjamin Franklin, who likened it to a battery of cannon (cannons grouped in a common place). The term was later used for arrangements of multiple electrochemical cells. By the middle of the 19th century, the Leyden jar had become common enough for writers to assume their readers knew of and understood its basic operation.

Around the turn of the century it began to be widely used in spark-gap transmitters: 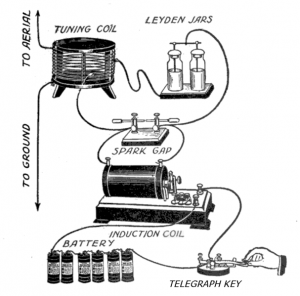 A spark-gap transmitter is a device for generating radio frequency electromagnetic waves using a spark gap.

These devices served as the transmitters for most wireless telegraphy systems for the first three decades of radio (1887–1916) and the first demonstrations of practical radio were carried out using them. In later years (prior to the development of practical vacuum tube systems) somewhat more efficient transmitters were developed based on high-speed Alexanderson alternators and Poulsen Arc generators, but spark transmitters were still preferred by most operators. This was both because of their uncomplicated design and the fact that the transmitter stopped generating a carrier as soon as the Morse Code key was released, allowing the operator to “listen through” for a reply. With the other types of transmitter, the carrier wave could not be controlled so easily, and elaborate measures were required both to modulate the carrier and to separate the receiving antenna from the transmitting antenna, to keep transmitter leakage from de-sensitizing the receiver. After WWI, greatly improved transmitters based on vacuum tubes became available, which overcame these problems, and by the late 1920s the only spark transmitters still in regular operation were “legacy” installations on Naval vessels. Even when vacuum tube based transmitters had been installed, many vessels retained their crude but reliable spark transmitters as an emergency backup. However, by 1940, the technology was no longer used for communication. Use of the spark-gap transmitter led to many radio operators being nicknamed “Sparks” long after spark transmitters ceased to be used. Even today, the German verb “funken”, literally, “to spark”, also means “to send a radio message/signal”.

1) These were lined up to create a battery.

3)They were used in electrotherapy