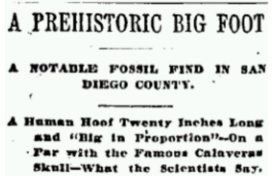 A headline in the July 21, edition of the Los Angeles Times of 1895 announced the following”

San Diego, July 18.__(Special Correspondence.) a discovery made in Sweetwater Valley in San Diego county some time ago may yet create a sensation among scientists when the full import of the fossil is made known.

While digging a well the workmen unearthed what appears to be the fossil of a huge human foot, a photograph of which has been taken specially for The Times.

This foot is twenty inches long and of exceedingly large dimensions. It was found some forty or fifty feet below the surface of the earth, and had there been a means at hand for further exploration, it is believed that other parts of a gigantic human skeleton, of which this fossilized foot is deemed a part, might have been found.

I haven’t been able to discover what happened after this report, but we doubt very seriously whether in fact a sensation was created because in our experience investigating these things, scientist were much more likely to flock in a direction away from this discovery than to the discovery.

Also, having an actual photo of the fossil and the fossil itself would have made it a touch more difficult to label the artifact as the foot of an ape-man or any other type of primitive man.

The writers of the article referenced the Calaveras Skull, a giant skull that had been found in a mine by a miner named Mattison in 1866. That fossil, although championed by an archaeologist, was controversial because of its size and the strata in which it was found.

According to geological principles, that gravel encrusted skull had been deposited before the mountain that topped the mine had been formed.

As to the giant fossilized human foot? Not knowing where it is now, is almost equal to it not ever having existed.