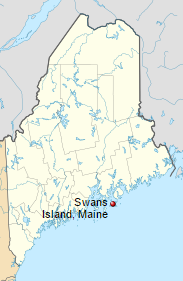 “A race of much larger stature than the Indian of today”

“At that part of the island called the “North” when the first settlers came there were five different places plainly seen where the Indians that their “set-downs” or villages. There was another at the Middle Head, one in the Reed field near the eastern shore, and several around Old Harbor. In these ancient shell heaps have been found, by men of our present day, flint arrow heads and hatchets which must have taken much skill and patience in making. These must have been their implements used in hunting and perhaps in warfare. The promontory where the light-house stands, near the entrance to Old Harbor, is called Hocomock, a name given to it by the Indians long before the white men came. It may have been their name for this locality. Near to Hocomock Head is appoint of land extending into the harbor, called Burying Point. A large number of Indian skeletons were unearthed by the plow. They were found most plenty near the Middle Head and near the “Carrying-Place”, which places were their burying-grounds. The skeletons were found just beneath the turf and were of large size, showing a race of much larger stature than the Indian of today. This tribe made irregular visits to the island for many years after the white settlers came, but of late, since their number has so decreased, they have ceased altogether.”